We’ve made it through another week. And that means it’s time for our latest featured photo! Today’s image comes from Memphis, the second capital of Egypt (it held that status from roughly 2950 B.C. to 2180 B.C.). The Great Sphinx at Giza, which I also visited, is justly world-renowned; but there’s another sphinx in Memphis that has also endured through the ages. 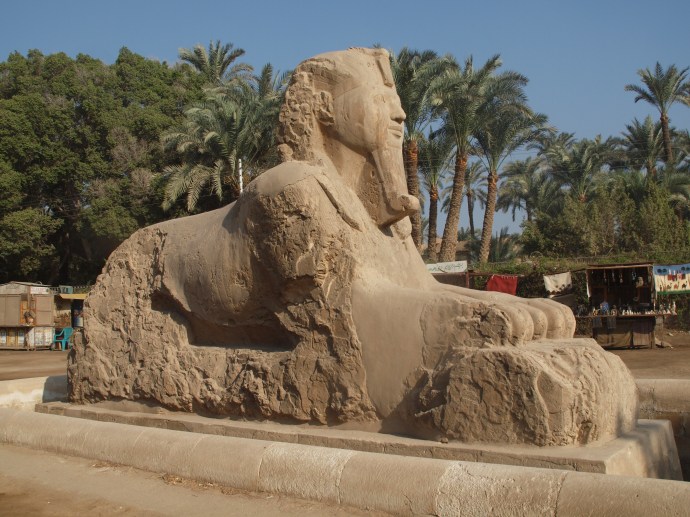 It’s not nearly as large as the one at Giza (it’s only about 26 feet long and 13 feet high, in contrast to the Great Sphinx at Giza which is 241 feet long); and it’s quite a bit younger (it’s believed to have been chiseled sometime between 1700 BC and 1400 BC, which means that the Memphis sphinx may have been built over a thousand years later than its Gizan counterpart). It’s been dubbed the Alabaster Sphinx, although it’s actually made out of calcite, a mineral that’s merely similar to alabaster.

This photo was taken during my trip to Egypt in September 2012.

Sharing is caring! If you liked this post, please tell people about it!

Touring Egypt, part 2: staring across the abyss of time in Giza

Previously in this ongoing series about my September 2012 holiday in Egypt, I recounted my impressions of the capital city of Cairo. (Seriously, if you haven’t read that one yet, you should do so immediately!) Now we proceed to Giza, the featured attraction of my sojourn in the Land of the Pharaohs. We’re still just getting started; there are many more Egyptian locales that I still need to get around to covering in this series!

The pyramids at Giza have been tourist magnets since the days of the Roman empire, making them among the very first travel hotspots in world history. (International tourism originated during Roman times.) One of the joys of my own visit to the Giza Plateau was the knowledge that I was gazing upon the very same sights that had allured and mystified a hundred generations of travelers before me. While I took in countless spectacular things during my fortnight in Egypt, the ruins at Giza surpassed just about everything else. During the course of my stays in Cairo, I made three separate excursions to Giza; but I would eagerly go back yet again if the chance arose.

ON THE GIZA PLATEAU

Three principal pyramids rise up from the stretch of desert known as the Giza Plateau, which is about 10 miles from Cairo’s city center. All were erected in the 26th century B.C.

• The largest and most celebrated is, of course, the Great Pyramid, which was built for King Khufu (also known to us as Cheops, the Hellenized version of his name). Originally soaring to a height of 481 feet, the Great Pyramid stood as the tallest man-made structure in the world for over 3,800 years, until eclipsed by England’s Lincoln Cathedral in 1311 A.D. (Erosion has since reduced the height of the Great Pyramid to a still-impressive 455 feet.) The Great Pyramid has gained particular renown as the only one of the seven wonders of the ancient world that still survives intact in modern times.

• The second-biggest is the pyramid of Khufu’s son, Khafre (known alternatively by his Greek name of Chefren); at 448 feet it’s nearly as tall as the Great Pyramid itself. (Prior to erosion, Khafre’s pyramid topped out at 471 feet.)

• The bronze for third-largest goes to the pyramid of Khafre’s son, Menkaure (a pharaoh who also goes by the Hellenized name of Mykerinos); its height is 204 feet, down from 215 feet before the ravaging effects of erosion did their thing.

In addition to the main pyramidal trinity, the site contains several much smaller buildings in that shape, known as “Queen’s Pyramids” (in reference to the personages who were buried in them); and a variety of other, more conventional tombs. (The three largest pyramids were, themselves, conceived as mausoleums for the kings who decreed their construction. The mummies of those kings have never been found; their remains may have been purloined by grave-robbers in the distant past. Whether those grave-robbers succumbed to the curse of the mummy is anyone’s guess.) 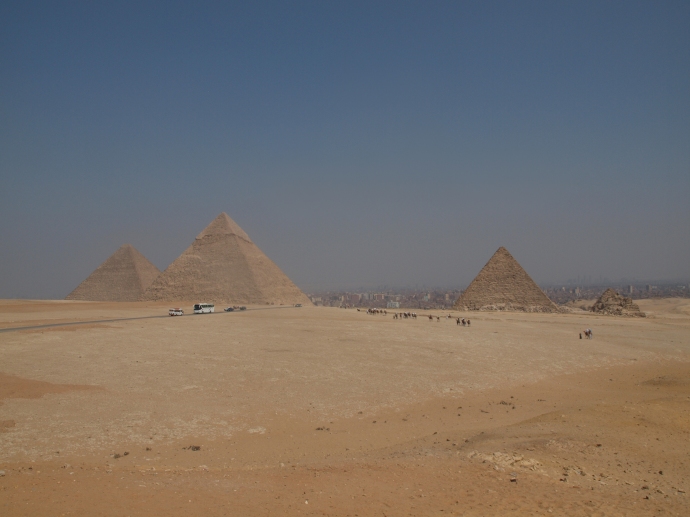 The world’s first skyline. Left to right: the Great Pyramid; the pyramid of Khafre; and the pyramid of Menkaure. One of the Queen’s Pyramids is visible at the extreme right.

My tour group in front of the Great Pyramid.

The pyramids are remarkable works of engineering that surely deserve to be considered among the world’s first great works of architecture. As with Stonehenge and the moai of Easter Island, we’re not completely sure how they were built, in light of the primitive technology available to the society that designed them. It’s no wonder that, when writing a midterm examination in a freshman year history course at university, I speculated that benevolent space aliens assisted the ancient Egyptians in the construction of their iconic monuments. (I received an “F” on that exam, but it’s not my fault that my professor wasn’t open to my revisionist scholarship.) 🙂

My experience visiting Giza’s pyramids wasn’t limited to admiring them from the outside. END_OF_DOCUMENT_TOKEN_TO_BE_REPLACED