Another Happy Friday to you, as the holiday season is now upon us.

Today’s featured photo comes from Paris, the City of Lights. Fittingly enough, it’s an image created after dark. The subject is the I.M. Pei-designed entrance pyramid at the Musée du Louvre. 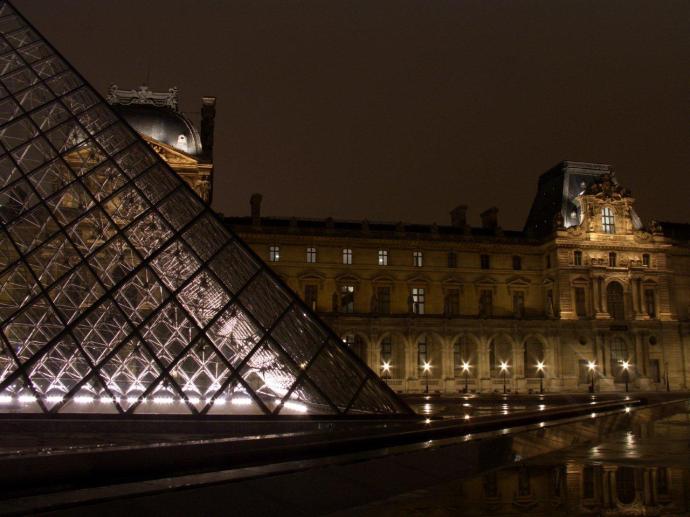 This week, of course, has been all about pyramids here at H-Bomb’s Worldwide Karaoke! Unlike the ones in Giza, which were built with limestone bricks, the pyramid at the Louvre is comprised of 673 panes of glass in a metallic framework. (An urban legend, repeated in a certain low-quality Dan Brown novel whose name I won’t even bother mentioning, claims incorrectly that the Louvre’s pyramid contains 666 panes of glass and therefore draws power from the number of the Beast.) Completed in 1989, Pei’s structure contrasts dramatically with the Baroque architecture of the rest of the museum.

This photo was taken during my visit to Paris in the fall of 2005. When I took it, rain had just fallen, which made for some nice reflections.

Country no. 8 on my World Karaoke Tour: Vive la France! 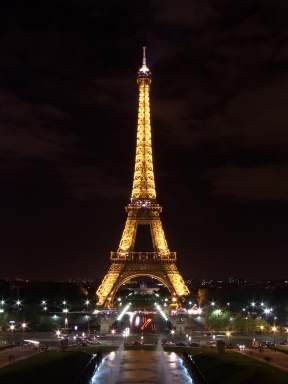 Generations of Americans have been drawn to Paris for its culture. I came for karaoke.

Not long after returning from my 2 1/2 week Eurotrip in 2004, I tendered my notice of resignation to my horrible boss. I was finally extricating myself from an untenable work situation. My last day at the office was in early November. I left without having a new job in hand; that’s an indication of just how much I felt the need to get out.

It took me nearly a year to find a new position, partly because a headhunter who’d promised to help me seemed more interested in having me perform cut-rate legal work for his company than in placing me with a law firm (I referred to him as the “laissez-faire headhunter” when mentioning him to my friends). Only when I initiated my own networking efforts the following summer did my job search finally acquire momentum. One of my contacts referred me to an elite recruiter, who hooked me up with the law firm where I still practice today. I arranged to start that new gig in early October, 2005.

Before embarking on the next phase of my career, I decided to visit London and Paris for a little over a week. Paris was to be a weekend excursion from London. END_OF_DOCUMENT_TOKEN_TO_BE_REPLACED

Countries no. 6 and 7 on my World Karaoke Tour: the Netherlands and Belgium 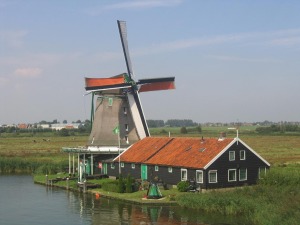 After my World Karaoke Tour was shut out in Italy, I headed north and hoped that things would go differently in the Netherlands and Belgium. Three train rides later, and some 16 hours after my departure from Venice, I rolled into the Dutch capital.

Amsterdam is well-known for its Red Light District, where one can indulge in certain activities that are unlawful in most of the world. To gain a full flavor of the city in which I now found myself, I made sure to check out the Red Light District (strictly out of curiosity, of course). 🙂 Actually, I didn’t have to wait long after my arrival in Amsterdam to observe one of the city’s legalized vices: as soon as I disembarked from the train, I witnessed people smoking joints on the platform.

I probably could have gotten high myself from the secondhand smoke that was wafting up from all of that cannabis. But doing the Cheech & Chong thing was unnecessary for me. As this blog reflects, singing karaoke provides a natural high for me. So, although many tourists in Amsterdam end up in that city’s “coffee shops”, I set out in search of a venue where I could indulge my addiction to song. Happily, that quest proved much more successful in Amsterdam than it had in Rome; and on Tuesday night, August 31, 2004, the Netherlands became country no. 6 on my World Karaoke Tour.

I opened with “Footloose,” perhaps a risky choice because most of my audience in the bar that night consisted of first-year university students (They were in the midst of their orientation week). Those whippersnappers hadn’t even born yet when Footloose: the movie was released in 1984, and they’d probably never heard its title song, originally recorded by Kenny Loggins. (An atrocious remake of the movie — a “reboot,” in current Hollywood parlance — would be foisted upon filmgoers in 2011; but on that magical night when I strode onto the stage in Amsterdam, the release of the Footloose remake was still seven years in the future.) One thing that I had going for me: the Footloose theme song is an outstanding dance anthem that invariably gets a crowd fired up. Have a look at the closing scene from the movie, in which the full potential of the song is realized:

My concerns about my song selection proved unjustified; the young scholars responded with enthusiasm to my rendition of “Footloose.” If this was their introduction to the song, it had made a favorable first impression on them. My trademark H-Bomb leg kick at the end of the song didn’t hurt. And my Amsterdam karaoke appearance marked the first time that I uttered what would become a signature line for me at my appearances in foreign venues: “New York City is in the house!” This too helped endear me to the audience.

In addition to “Footloose,” I performed four other songs over the course of the evening. I couldn’t tell you what those other songs were, as I neglected to document that information (The name of the bar where my singing took place has also long since been erased from my memory banks). END_OF_DOCUMENT_TOKEN_TO_BE_REPLACED