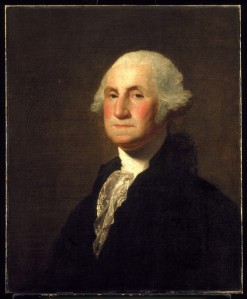 In July 1790, during his first term as President of the fledgling United States, Washington returned to the house, as part of an area sightseeing expedition that he led for family members and his Cabinet. END_OF_DOCUMENT_TOKEN_TO_BE_REPLACED

I sat in the money chair: My experience as a quiz show contestant

Earlier this month I learned that when a bird poops on you, it really does bring good luck. For over 13 years, one of my most sought after goals has been to become a contestant on a broadcast quiz show. Finally, a couple of weekends ago, that dream was realised. I competed — and won several matches — on the NBC network’s game show, “Million Second Quiz” (MSQ). And it all started with a defecating pigeon.

Overview: the basic rules of the game

To understand what follows, it will be helpful to have a brief familiarity with how MSQ worked. Admittedly, the rules were complicated and are difficult to explain concisely (which partly explains why MSQ attracted a relatively low number of viewers); but I’ll do the best I can.

The show ran 24/7 over a period of about 11 days, from September 8th through September 19th, 2013, comprising a total of 1 million seconds (hence the show’s name). At the heart of MSQ was its continuous series of 1-on-1 matches, known as “bouts.” In each bout, the contestant who’d won the previous match sat in a seat called the “money chair”; the challenger, who was entering the arena for the first time, stood at a lectern. Each bout lasted for 500 seconds, during which the two opponents were read a series of multiple-choice questions on a wide variety of trivia topics. (Although wide-ranging, the question sets included a heavy concentration of pop culture.) After a question was presented, each player had to push a button corresponding to the letter choice of the answer within 5 seconds; a player would be awarded 1 point for each correct answer. In a typical bout, a total of 14 or 15 questions would be asked. If both players had accumulated the same number of points when the 500 seconds had elapsed, a tiebreaker question was provided. Whichever player buzzed in first on a tiebreaker got first crack at answering it, and if his response was correct he won the match. If he missed, his opponent received an opportunity to answer the question and steal the bout.

If the player in the money chair emerged victorious in the bout, he remained in that seat to take on a new challenger. But if the challenger won, the incumbent was ejected from the money chair (and was finished playing), and the challenger replaced him in it. The money chair displayed a numerical counter that was reset to zero dollars when a new player took his place in it, and increased by ten dollars for each second that a particular player remained in the chair. Thus, if a player went on an extended run of victories, his tally of accumulated money would continue to climb. However, being knocked out of the chair by losing to a challenger would, under most circumstances, cause a player to forfeit all of his accumulated earnings. (Yes, I said “under most circumstances.” I told you the rules were overly complex.) 🙂 After MSQ’s finale this past Thursday night, only the top four players, out of the well over 1,000 contestants who played at least one bout on the show, got to keep their money; the first place finisher also grabbed a sizable bonus and walked away with a total cash prize of over $2.6 million dollars. But most of the participants left with no cash winnings at all, no matter how many bouts they won.

As the 1 million seconds ticked off, most of the bouts were live-streamed over the internet by NBC, literally around the clock. The exception was a small number of bouts that were played on selected nights between 8:00 pm and 9:00 pm, eastern time; instead of being watchable online, those prime-time bouts were broadcast live on network television, and were hosted by Ryan Seacrest. In general, qualifying to play on one of the televised bouts in prime time required winning an insanely large number of live-streamed matches.

Oh, and one other wrinkle: the four people who at any given juncture had accumulated the greatest amounts of money had to live, Big Brother-style, in an apartment in the studio. Because MSQ was sort of a hybrid between a game show and a reality show.

Initial steps of the audition

The casting process employed by MSQ was very different from the mechanism typically utilized by game shows in the U.S. to find contestants. END_OF_DOCUMENT_TOKEN_TO_BE_REPLACED

Santacon 2012: a photo and video essay

In the post that celebrated my first blogoversary earlier this month, I mentioned that I was looking forward to attending the latest Santacon as eagerly as I was awaiting any of my upcoming international travels. And this past Saturday, Santacon once again exceeded my expectations.

For the uninitiated, Santacon is an annual, all-day-long gathering of thousands of people dressed as Santas as well as an assortment of other characters (some of whom relate to the holiday season and some of whom have no particular connection to this time of year). The Santaconners run around throughout the city, pausing at various landmarks as well as watering holes. Santacon is held in dozens of countries around the world, but the one in New York City generally has the largest turnout. Ellen of the travel blog “The Time-Crunched Traveler” included Santacon on her list of “10 ways to celebrate Christmas in New York City”. (However, Ellen and I have a friendly disagreement about Santacon, as she doesn’t appreciate the event in the way that I do. In fact, she wrote, “[Santacon] is not really something I have a desire to actually participate in.” But as far as I’m concerned, she’s missing out! :))

My blog post about the 2011 edition of Santacon, which you can read here, provides more background on what Santacon is all about.

Some of the many assembled participants at the starting location: Hudson River Park at Pier 84. Of course, there were far too many Santas to fit in the frame of a single shot. 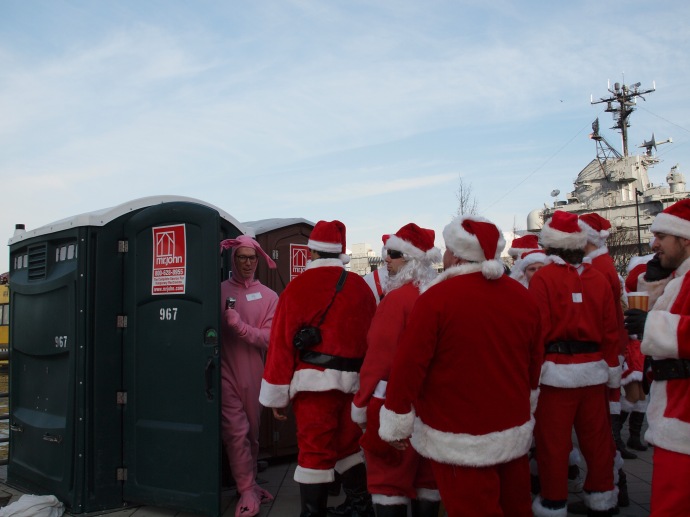 This is what happens when Santas start drinking at 10 a.m.

In the backdrop in these shots you can see the Intrepid Sea, Air & Space Museum, a floating museum built on an aircraft carrier. The Intrepid was where I visited a Space Shuttle in August 2012.

Here I am at Santacon 2012, with one of the best Santas I’ve ever seen:

The guy standing next to me here looked the most authentic of any of the thousands of Santas in attendance, even though he wasn’t actually wearing a traditional Santa suit.

One of the things that makes Santacon so special is the boundless creativity displayed by the participants. END_OF_DOCUMENT_TOKEN_TO_BE_REPLACED

When most people from other parts of the world think about New York City, they visualize Manhattan. But the Big Apple’s most populous borough, and one whose grittiness perhaps better represents the real spirit of New York, is Brooklyn. Indeed, if Brooklyn had not been consolidated into New York City in 1898 but had instead remained independent, it would, even today, remain the fourth largest city in the United States — just as depicted on the sign featured in the opening credits to Welcome Back Kotter. I enjoy spending time in Brooklyn; visiting Brooklyn Bridge Park, and strolling the boardwalk at Coney Island, are two of my very favorite things to do in this city.

One thing that my forays into Brooklyn had never included, prior to Sunday night, was karaoke singing. In the over 16 years that I’ve been a New York City resident, I’ve sung in Manhattan on hundreds of different occasions; and I’ve also made multiple karaoke appearances in the borough of Queens. But Brooklyn had never witnessed an H-Bomb performance. Until now. END_OF_DOCUMENT_TOKEN_TO_BE_REPLACED