Country no. 29 on my World Karaoke Tour: I was not a chicken in Kiev 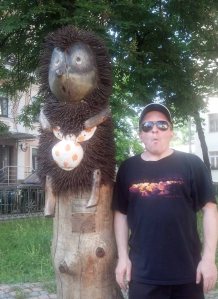 Acccording to the ratings on TripAdvisor, the no. 11-ranking attraction out of 228 things to see in Kiev is a statue of a hedgehog. That’s right: in a city whose origins may trace back to a settlement in the 5th century A.D. — a metropolis that abounds with architecturally spectacular monasteries and churches — one of the most popular sights is a sculpture of a spiny mammal. That’s the kind of quirky and charming place that Kiev, the Ukrainian capital, is. And it was in such a setting that I tied the record for singing karaoke in the most countries.

The aforementioned monument (see photo at right) depicts the protagonist of an animated short film from what was then the Soviet Union, released in 1975, entitled “Hedgehog in the Fog.” While you may not have heard of that particular cartoon, in 2003 it was named the best animated movie of all time in a survey of animators and film critics from around the world. But you don’t have to take that survey’s word for it; you can view “Hedgehog in the Fog” right here, complete with English-language subtitles!

The statue that immortalizes the star of this cinematic masterpiece was erected in 2009 in a small public park. It was created by Ukrainian artist Constantine Skretutsky. Sadly, I learned today that just this month, the sculpture was destroyed or damaged by vandals, and the pedestal on which it had stood is now empty. I don’t know what kind of sick bastards would do such a thing. Anyway, Mr. Skretutsky will restore the beloved hedgehog, and it’s expected to be reinstalled in the same park in May 2014. I feel fortunate that I got the chance to see it in person.

UPDATE (July 1, 2016): I’m pleased to report that at some point, the hedgehog monument was fully rebuilt!

A historic night for my global tour

Paying homage to the most legendary hedgehog in cinema, by visiting its statue, was one of the top items on my itinerary for Kiev; but of course, it wasn’t my highest priority. What I was most looking forward to was achieving a special milestone in my karaoke travels. END_OF_DOCUMENT_TOKEN_TO_BE_REPLACED