L.A. story, part 2: cities of the dead in the City of Angels 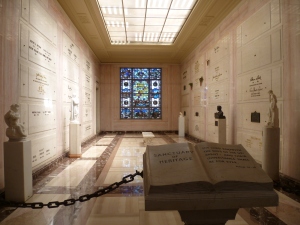 A common pastime for tourists in Los Angeles is to drive past the homes of celebrities. One of my cherished activities during my own trips to L.A.. has involved a twist on that concept: visiting the current residences of people who are rich, famous — and dead. As you might expect given the association of the city with show business, several area cemeteries include large concentrations of former stars from the entertainment field. I’ve been to two of those cemeteries so far: Forest Lawn, which is located in the town of Glendale; and Hollywood Forever, which as its name implies is situated in the Hollywood district of Los Angeles.

This post is a sequel of sorts to my article from December 2012 about offbeat attractions that I found in Los Angeles. Below, in part 2 of the series, I recount my excursions to a pair of the L.A. area’s “cemeteries to the stars.” As those visits took place in 2012 and 2013, it has obviously taken me a while to get around to writing about them. However, be warned: death waits for no man. END_OF_DOCUMENT_TOKEN_TO_BE_REPLACED