One small step for an H-Bomb: my visit to a space shuttle 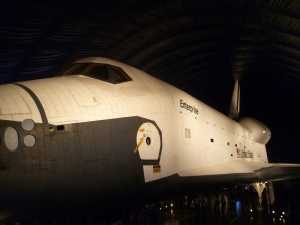 Space flight is the fulfillment of mankind’s deepest aspirations and impulses. While an inveterate traveler like myself is proud of the wanderlust that pushes me to circle the globe, I’m in awe of those courageous individuals who slip the surly bonds of Earth and voyage to the outer limits of the distances that technology permits us to traverse. Just the fact that astronauts can put up with g-forces and weightlessness is impressive to me; I would never survive a single session in the “Vomit Comet” that astronauts are taken up in as part of their training, and even a ferry ride in choppy seas makes me queasy. And over a half-century after Yuri Gagarin etched his name into the history books, space travel remains a dangerous proposition (just as ocean crossings on this planet once were). I salute the men and women who place their lives on the line in service of the advancement of science — and of helping to push the human race forward.

On a Saturday afternoon in August 2012, I paid homage to the American space program, and some of the hardy individuals who’ve populated it, by visiting the original Space Shuttle. END_OF_DOCUMENT_TOKEN_TO_BE_REPLACED