Cambodia: spiders and snakes but no karaoke for me in Siem Reap 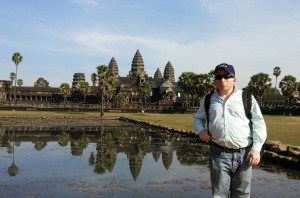 After adding Thailand and Singapore to my World Karaoke Tour, I aimed to make Cambodia the 38th country in which I’ve done karaoke. What had motivated me to go to Cambodia — and specifically, to the city of Siem Reap — was the chance to see a bucket list attraction, the Angkor Wat Temple. Things didn’t quite go according to plan. By the time I left Siem Reap, I had failed to sing karaoke; and although I made it to Angkor Wat, that temple has not been crossed off my bucket list, for reasons that I’ll explain.

No singing in Siem Reap

The main nightlife thoroughfare in downtown Siem Reap is Pub Street. As its name implies, that avenue is lined with pubs, as well as restaurants. The area also abounds with vendors hawking street food. And one end of Pub Street intersects with the night market, a strip of stores that offer a wide variety of souvenirs. 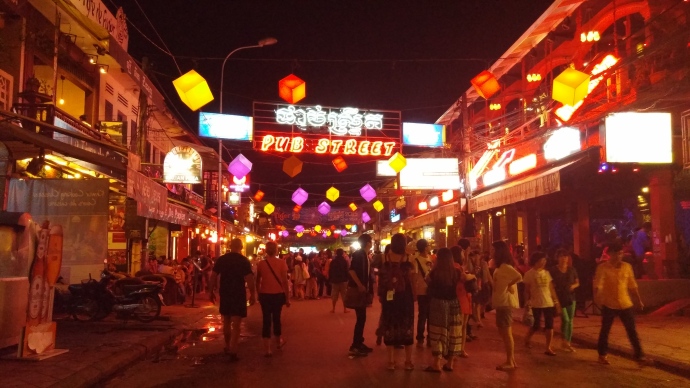 Perhaps the most unusual street food peddlers (compared to what I’d encountered in prior travels) operated a cart whose culinary offerings included tarantulas and fried snakes. END_OF_DOCUMENT_TOKEN_TO_BE_REPLACED

During the past week, I participated in a personality interview via Skype which served as the third round of the audition process for a nationally televised quiz show. I’ll let you know if things go any further with that. (And yes, during that interview, I name-checked this blog, as well as mentioning my World Karaoke Tour.) 🙂

Anyway, this week’s featured image comes from my recent visit to the Angkor archaeological site near Siem Reap, Cambodia — and, specifically, from the Angkor Wat temple that is so identified with Cambodia that it appears on the national flag. The temple’s towers — one central tower, rising to a height of 213 feet, surrounded by four shorter towers — form a distinctive and recognizable profile. Visitors enjoy documenting their pilgrimages to the site: 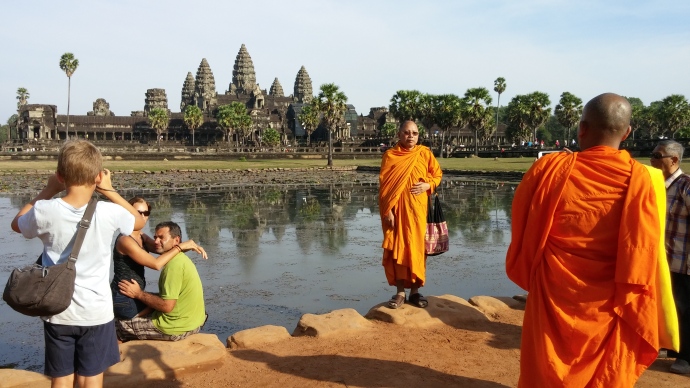 (And yes, I realize that the photos being taken as depicted above aren’t true “selfies,” as they’re being taken by persons other than the subjects. But I did see plenty of people using the now-ubiquitous selfie sticks in front of the temple.)

The temple was built in the 12th century. The city of Angkor of which it was a part was the capital of the Khmer empire and at its peak may have boasted more than a million inhabitants; indeed, it is claimed that Angkor was the largest city in the world prior to the Industrial Revolution. Today, that former megalopolis, and the copious ruins that it contains, are a UNESCO World Heritage Site.

My rib injury continues to heal, leaving in doubt whether I’ll be in condition to embark on my already-delayed trip to Rome in mid-February. In the meantime, I’d like to reminisce about my recently-concluded jaunt to southeast Asia. One place I got to in that region was Ta Prohm, a temple complex in Angkor, Cambodia. Celebrated for having trees bursting through the temple buildings, Ta Prohm is a case study in what happens when you abandon a site of human settlement for 400 or so years. (The complex was abandoned in the 17th century.) 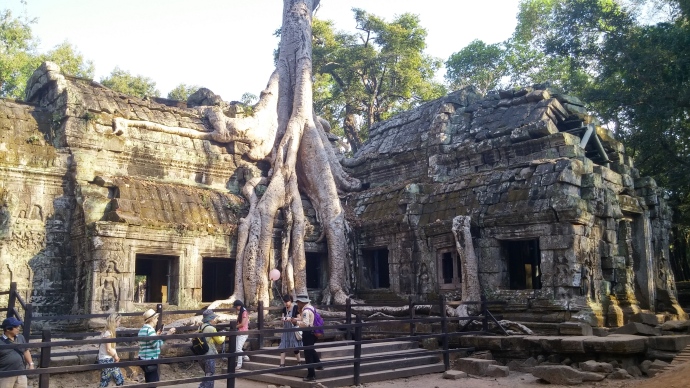 Ta Prohm is a poster child for the “life after people” effect: nature gradually takes over and reasserts her primacy over the works of us puny humans.

And here’s a bonus image showing another of my favourite scenes from Ta Prohm. In the foreground, you can see the destruction wrought by the tree as its roots worked their way through the structure. 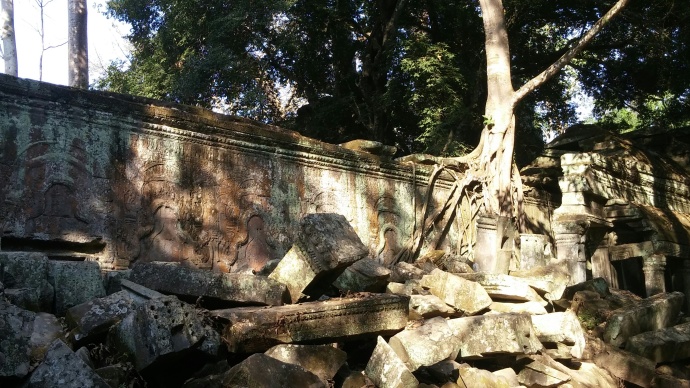 All of the Angkor archaeological region, which is best-known for the Angkor Wat Temple, is collectively a UNESCO World Heritage Site.

Do you like visiting the ruins of once-great structures?