Country no. 36 on my World Karaoke Tour: one night in Bangkok

For my Thai karaoke debut in Bangkok, the obvious choice for my song selection was “One Night in Bangkok,” Murray Head’s worldwide top-five hit from the Broadway musical, Chess. Prior to my foray to Southeast Asia, I spent weeks practicing the song. There was only one problem: the karaoke bar in Bangkok turned out not to have that song available. Yes, the karaoke bar in Bangkok. As I’ll cover in future installments on my recently concluded vacation, the vast majority of karaoke establishments in East Asia offer singing opportunities solely in the form of “karaoke box,” a style that features private rooms that customers rent with their friends or family members. For an exorbitant hourly rate, the patrons in the private chamber sing to each other during their allotted time. (A number of venues in New York City also offer private rooms for karaoke.) But as you know, karaoke for me is all about the performance, and I insist on singing in public in front of an audience of strangers. Karaoke box is not for me. Luckily, the amazing front desk staff at my Bangkok hotel, the Grand Eastin, located for me a restaurant called Sabaijai Kebtawan that specializes in seafood, and — more importantly — where I was able to perform on a stage in my accustomed manner on a Sunday night. With those plans set, I had every expectation that the Land of Smiles (as Bangkok is commonly referred to) would live up to its sobriquet. But then my smile turned upside down.

Perusing through Sabaijai Kebtawan’s songbook when I got there, I quickly discovered the shocking absence of the one song that I’d been looking forward for weeks to performing in Thailand’s capital city. “One Night in Bangkok” was nowhere to be found among the pages of English-language offerings. So I would not be discoursing in song about how one night in Bangkok makes a hard man humble, or about how Siam was gonna be witness to the ultimate test of cerebral fitness. By depriving singers of the chance to choose my desired Murray Head song, the proprietors also denied this blog post the opportunity to fully live up to its name. 🙂

Forcing myself to overcome my dismay, I ended up selecting a song that has nothing to do with Thailand, but which has long been one of my favourite tunes to perform: Billy Joel’s “My Life.” Here you can watch me singing it at Sabaijai Kebtawan:

Although there’s only one video above, we actually had to do two takes of the song. After I’d launched into “My Life” for the first time, the restaurant employee to whom I’d given my camera to videotape me inexplicably started pointing the camera at the ground. So I had the DJ start the song over. At one point during the video that resulted from this successful redo, you can overhear the DJ instructing his assistant (in Thai, of course) on how to hold and aim the camera properly in order to ensure that I, the singer, appeared in the frame. (Note that the videographer wasn’t exactly faced with a Herculean task; he didn’t require knowledge of how to operate the camera, as I’d already set the camera to begin recording before handing the camera to him.) Anyway, it all worked out in the end.

And that is how, on December 28, 2014, Thailand became the 36th country on my World Karaoke Tour — and the first new one since the Dominican Republic in May 2014!

Normally during a night out at karaoke, I stick around to perform multiple songs, and I enjoy interacting with the crowd in order to spread some H-Bomb cheer and meet some of the locals. But my stamina was seriously lacking on December 28. Here’s where I mention an injury that I’d sustained about two weeks before my departure for Asia, which exerted a profound effect on the trip: a bruised rib (a “contusion” in medical parlance). The pain from that condition (despite ample intake of ibuprofen) had contributed to me only receiving 4 hours of sleep the night before my Bangkok karaoke appearance, and to my waking up for good at 2:06 a.m that day (although I napped for roughly two-and-one-half hours in the early evening prior to setting out for my karaoke excursion).

My physician in my home city of New York had assured me the week before I jetted to Asia that my injury need not force the cancellation of my vacation; however, in retrospect, proceeding with the journey at the time that I did may have been a mistake, as, my intermittent pain from the sore left rib reduced the amount of sightseeing that I was able to take in during my holiday. Despite my best efforts, the strains of my travels also exacerbated the rib injury, from which I’m still recovering as of the publication date of this article. Some of these drawbacks may have been foreseeable.

On the other hand, I’d been reluctant to postpone the trip because it involved a complicated itinerary that I’d been planning for nearly a full year. (I did have travel insurance that would have covered the costs of changing airline and hotel reservations.) As I work full-time as a lawyer, it’s not easy for me to find a block of time to reschedule a two-and-one-half week vacation (especially since, as you know, I always have other upcoming trips in various stages of planning.) The upshot is that if I’d wanted to delay the trip to East Asia, I probably would have had to put it off until one full year later — something I was reluctant to do. Moreover, singing brings me joy, especially when I’m doing it on the road and adding new places to my world tour. So I wanted to get on with the latest countries on my itinerary. Besides, I may have acquired a false sense of confidence after my enjoyable visit to India in spring 2014, a trip on which I’d embarked just two days after having a wisdom tooth removed.) But it’s important to keep in mind that travelling with an injury can be rough, especially if you’re also trying to fit in an evening activity like karaoke that requires a high level of energy.

As to the effect of my circumstances on my evening of karaoke in Bangkok, being on painkillers and other pharmaceutical products also reduced the amount of alcohol I was able to safely consume for the evening — a factor that does often affect how many songs I’ll stay for. One of the medications also had the side-effect of making me drowsy. Given my overall exhaustion and physical weakness, a late night wasn’t in the cards for me. Thus, after stepping off the stage, I finished my seafood meal and grabbed a taxi back to my hotel. This wasn’t going to be one of those nights where I closed down the establishment at 2:00 a.m. Don’t get me wrong, I had a fun time performing my one song; but the evening was truncated compared to my usual karaoke adventures. (This pattern would be repeated at my subsequent karaoke outings during my Asian junket.)

Due to the rib injury, I also was not carrying my DSLR camera and tripod (both of which are relatively heavy) as I normally would have been whilst out and about on a trip; I would have used that equipment to photograph the exterior of Sabaijai Kebtawan after dark. I like being able to post pictures of the outsides of the karaoke venues where I perform, in order to supply context. But I had to do the best I could with the limitations I was operating under. I’d packed the DSLR and tripod in my luggage, but both of them remained stashed in my suitcase for the entirety of my trip to eastern Asia. So, due to my lack of actual images of Sabaijai Kebtawan, you’ll just have to imagine it as a generic-looking house of seafood. 🙂

Incidentally, if you’re familiar with Billy Joel’s “My Life” and were paying close attention to the lyrics in my version here, you may have noticed that I flubbed a couple of the lines. What can I say? I hadn’t covered that song in quite some time, and like I said I wasn’t operating at 100% of capacity on this particular evening. But the important thing is that I did karaoke in Bangkok!

Here’s a video of the song “One Night in Bangkok” that I had originally hoped to sing in that city, by the way. For my money, it’s one of the great one-hit wonders of the 1980s:

With Thailand having entered the books as my 36th country for singing karaoke, attention shifted to the next stop on my tour: Singapore, the city in which I would be ringing in New Year’s 2015. 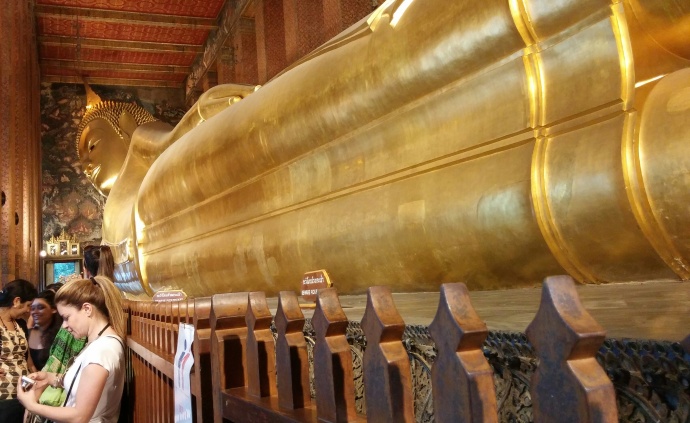 The Reclining Buddha at the Wat Pho temple in Bangkok is about 50 feet high and 150 feet long, and is covered in gold leaf.

10 thoughts on “Country no. 36 on my World Karaoke Tour: one night in Bangkok”