Country no. 35 on my World Karaoke Tour: singing in the Dominican Republic’s oldest karaoke bar

From swashbuckling pirates to beaches gleaming with white sand, the Caribbean is replete with both dramatic history and natural beauty. Yet until this year, my world travels had never taken me anywhere in that 1 million square mile region. For shame! Finally, during Memorial Day weekend in 2014, I made my long-overdue first foray to a Caribbean destination: Santo Domingo, the capital of the Dominican Republic. And it was there that the country often abbreviated to “DR” became the most recent addition to my World Karaoke Tour.

Getting to the DR proved a more arduous journey than expected for a trip that only involved a four-hour flight. My departure out of JFK International Airport on Friday night, May 23 was delayed — first due to thunderstorms passing through the New York City area, and then due to the need to wait for the pilots of my aircraft to arrive at the airport. You see, due to the initial weather-related delay, the crew that had originally been assigned to my flight would have exceeded the FAA’s permissible limit of working hours for one day if they had gone ahead and piloted the plane. So my fellow passengers and I from JetBlue Flight 810 had to wait for a new captain and first officer to make their way to JFK. As a result, my flight, originally scheduled to depart at 9:00 pm, didn’t end up pushing back from the gate until close to midnight. We landed in Santo Domingo at about 4:00 a.m., and I finally got checked in to my hotel at about 5:30 a.m.

Of course, the important thing was that now I had arrived; and the next night I would be able to do some karaoke!

The venue for my Dominican singing debut was a tavern called Kantabar. Run by the husband-and-wife team of Steven (who owns it) and Anais (who manages it), Kantabar was the very first karaoke venue in the Dominican Republic. It’s been in operation for some 20 years now.

Me inside Kantabar with Steven and Anais.

In my post about singing in India, I mentioned that I learned from the experience of a bar in New Delhi with a poorly lit singing area (which caused my karaoke video from that city to be unviewable), and started bringing along on subsequent trips a spotlight that attaches to my camera. My long weekend in Santo Domingo was my first trip in which I had the spotlight with me. Naturally, I managed to inadvertently leave my new lighting device behind at my hotel when setting out for my first night singing at Kantabar (a Saturday night). 🙂 Equally predictably, the lighting at Kantabar did not end up being adequate for the filming of videos. This is not a knock against Kantabar; there’s nothing unusual or wrong about a bar that maintains low ambient illumination levels. It’s up to me to make sure my equipment is up to the task.

The first song that I performed at Kantabar on Saturday night, May 24, 2014 was “Bésame Mucho.” That’s a Spanish-language song that I’d been eager to try out for a long time. With a title meaning “Kiss Me a Lot,” it was written and recorded by legendary Mexican singer-songwriter Consuelo Velázquez in 1940, and it’s since been covered by numerous artists around the world. In fact, it’s been honoured as the most-recorded Mexican song in history.

When I finished my rendition of Señora Velázquez’s timeless classic, la República Dominicana had become the 35th country on my World Karaoke Tour! Due to the aforementioned low lighting conditions, just as occurred with my song in New Delhi, my video of “Bésame Mucho” from Santo Domingo didn’t come out very well. I’ve converted the beginning of the song into an MP3, so that you can at least listen to a sample of my Dominican Republic karaoke debut:

On the following night I returned to Kantabar, and this time I remembered to bring the spotlight with me. Here are videos of two of my songs from Sunday night, May 25 (my second night at Kantabar): “Imagine” (originally recorded by John Lennon, of course), and “Oh, Pretty Woman” by Roy Orbison. As you can see, it made quite a difference to supply my own light source. 🙂

As you may have deduced from the fact that I went to Kantabar on multiple nights, I had a damn good time there. I found it to be a fun bar that drew an audience of enthusiastic and supportive people. Steven and Anais were extremely hospitable to me, and helped to make the latest stop in my karaoke travels a memorable one. I would gladly sing in Kantabar again if I found myself back in Santo Domingo.

Other Activities in Santo Domingo

My non-karaoke pursuits in Santo Domingo were also pretty enjoyable, even though the Museum of Rum and Sugarcane turned out to be unexpectedly closed on the Monday afternoon when I attempted to visit it. (I’d really been looking forward to learning more about rum, the spirit that’s so strongly identified with the Caribbean.) One highlight was finding a casino where I played some blackjack; as far as I’m concerned, any vacation in which I’m able to hit the blackjack tables is enhanced. And I also checked out the following points of interest of the city:

The (Faro a Colón) (Columbus Lighthouse)

The first landmass on which the explorer Christopher Colubmus made landfall in the New World was the island in the Bahamas that he named San Salvador. But later on during the same voyage, Columbus’s expedition dropped anchor off the northern coast of Hispaniola, in what’s now the Dominican Republic. (Hispaniola consists of the Dominican Republic and Haiti.) The Dominican capital of Santo Domingo (which was founded by his little brother Bartolomeo sometime between 1496 and 1498) is also allegedly Christopher Columbus’s final resting place. What’s known for certain is that the widow of his son Diego had his remains (as well as those of Diego) relocated to Santo Domingo in 1542, where dem bones were interred in a cathedral. It’s unclear what happened subsequently; Christopher Columbus’s remains may or may not have been removed to Cuba and eventually made their way to Seville, Spain.

In 1992, for the quincentennial of Christopher Columbus’s arrival in the New World, a monument to him opened in Santo Domingo. Dubbed the Faro a Colón (Columbus Lighthouse), this shrine contains a mausoleum that allegedly houses the mouldering skeleton of “Cristobal Colon.” But a cathedral in Seville also claims to house Mr. Columbus’s remains, and DNA testing has failed to conclusively resolve the question of where Columbus ended up. It’s also thought possible that at some point his remains were split up, so that some of his bones wound up in each of the two cities (Santo Domingo and Seville).

The Faro a Colón (Columbus Lighthouse) opened in 1992.

This mausoleum inside the Faro a Colón claims to be the residence where Christopher Columbus is spending eternity.

As for the location of the purported Columbian tomb in Santo Domingo, it took seemingly forever to build this monument; its design was the winning entry in a competition held all the way back in 1931. The architect, a Scotsman named Joseph Lee Gleave, was long-dead by the time construction began in 1986, and the building was barely ready in time for its 1992 opening. Oh, in case you were wondering: the Columbus Lighthouse is not a working lighthouse used for navigation by ships. But at night it does project light beams in a cruciform shape that are so powerful that they can be seen as far away as Puerto Rico, some 200 miles distant.

By the way, in addition to the mausoleum, the Faro a Colón contains a museum that displays artworks and artifacts contributed by every country in the Americas as well as many nations from other continents. 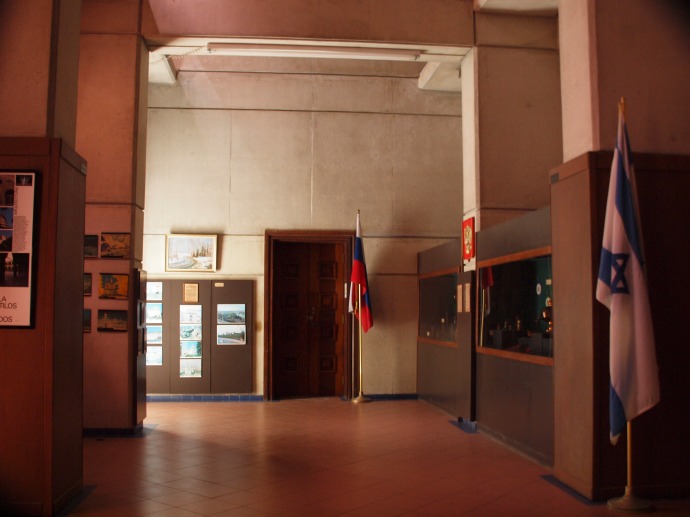 A glimpse inside the museum portion of the Faro a Colón.

Los Tres Ojos (“the three eyes”) is an open-air limestone cave with three subterranean lakes, all fed by an underground river. I thought it was pretty neat to find such a refuge for spelunking within the city limits of Santo Domingo. You can even take a boat ride across one of the lakes, and I did that (although it was a pretty quick voyage, since the lakes are all quite small). 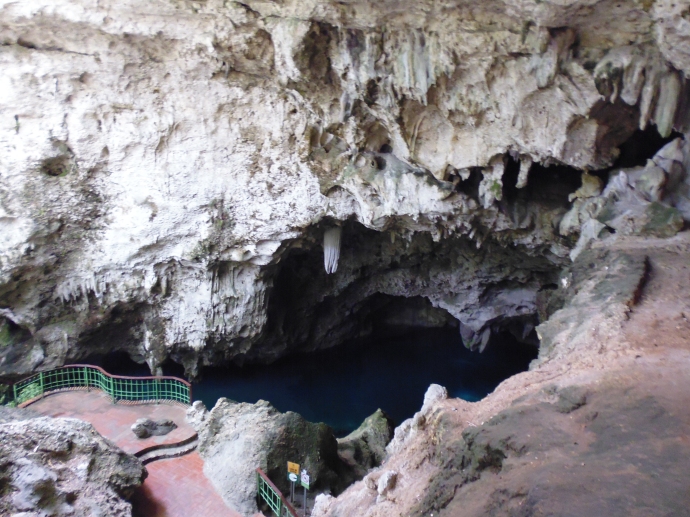 A closer view of Lago de Azufre, which is known for its vivid blue waters.

The oldest section of Santo Domingo, the Ciudad Colonial (known informally as the Zona Colonial) is a UNESCO World Heritage site. One of its focal points is Parque Colón (Columbus Square). Here’s a view of that plaza: 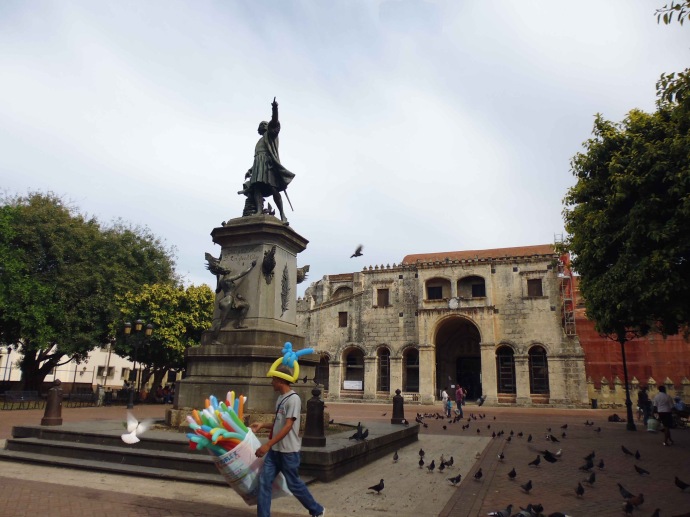 In the foreground of this image is a statue of Christopher Columbus. In the background is the Basilica Menor de Santa María Cathedral of America (St. Mary’s Metropolitan Cathedral Basilica of the First Incarnation of America, often referred to simply as the Cathedral of America). Completed in 1540, it’s the oldest cathedral in the Americas. Fun fact: it was commissioned by Pope Julius II, the same pontiff who hired Michelangelo to paint the ceiling of the Sistine Chapel!

The interior of the Cathedral of the Americas features a gorgeous barrel-vaulted ceiling.

What’s next on my World Karaoke Tour

Before we get to the subject of my upcoming karaoke travels, I will admit that after writing about India (country no. 33 on the tour), I skipped doing a report on Sri Lanka (country no. 34, visited on the same trip that took me to India), and jumped ahead to country number 35 for the present blog post. This was because I wasn’t happy with the quality of any of the videos from my night of singing in Colombo, Sri Lanka. Even the audio wasn’t up to my standards. 🙂 I may still do a write-up about that evening, though.

Here’s what’s on the agenda for the coming months: in late November 2014, I’m off to the Eternal City. That’s right, I’m headed to Rome! As I’ve discussed before, I’ve actually been to Italy on two prior occasions — including stops in Rome on both visits — without ever managing to sing in that beautiful country. But that’s about to change. This time, I already have a singing location in Rome lined up. I’m even working on a couple of Italian-language songs to perform for the occasion! So, barring a catastrophic illness (such as the stomach flu that caused postponement of the “Jeopardy!” audition I was scheduled to have in Pennsylvania last weekend), Italy will become country number 36.

But that’s not all! Because about a month after Rome, I’ll be off to Asia. If all goes well, by early January, Thailand, Singapore, Cambodia, and South Korea will have become countries 37 through 40 on my World Karaoke Tour. Exciting times are ahead. 🙂

A street corner in the Zona Colonial in Santo Domingo.

Have you been to the Dominican Republic?

22 thoughts on “Country no. 35 on my World Karaoke Tour: singing in the Dominican Republic’s oldest karaoke bar”