Exploring the fascinating home of the Explorers Club

The urban jungle of New York City may be the last place that you’d associate with exploration and adventure. But on Manhattan’s posh Upper East Side, you’ll find the international headquarters of the Explorers Club. Since the club’s founding in 1904, its members have included some of the most distinguished voyagers and scientists on the planet; and the club’s townhouse is a celebration of their derring-do as well as their dedication to the advancement of human knowledge. In October 2013 I was privileged to attend an event at the historic townhouse.

What is the Explorers Club?

Members of the Explorers Club (EC) are at the cutting edge of making new discoveries about not only our world, but the universe. According to the club’s website, the EC boasts 30 chapters worldwide and draws members from a total of 60 countries. (It’s been reported that worldwide membership numbers approximately 3,000 hardy souls.) The website further explains that to qualify for membership, a person must “contribute[] in broad terms to the cause of exploration and . . . evidence a sustained interest in some field of scientific exploration and the furtherance of scientific knowledge of the world.” Merely being well-traveled is insufficient to gain admission; “[e]xtensive travel without a scientific purpose or objective, big-game hunting, photography or similar pursuits in remote parts of the world do not represent sufficient qualifications to become a member of The Explorers Club.” The specialties of current members run the gamut from archaeology to astronomy to marine biology to polar exploration; but fieldwork of some kind is a sine qua non of becoming an Explorers Club member. Moreover, to count towards consideration for membership, that fieldwork must have been under the auspices of “a recognized scientific organization, university, or museum.”

The formal application process, incidentally, isn’t the only way to gain entry into the club. Over the years, the EC has bestowed honorary membership on an illustrious list of personages. To give just a few examples, honorary members over the years have included:

• Theodore Roosevelt (the 26th President of the United States, who undertook a perilous expedition into the Amazonian rain forest during his post-Presidential years).

• Albert I, Prince of Monaco (a ground-breaking oceanographer).

• Charles Lindbergh (the first person to make a solo nonstop flight across the Atlantic Ocean).

• John Glenn (an astronaut and later a United States Senator who was the first American to orbit the Earth).

• Charles Yeager (a test pilot who was the first person to fly faster than the speed of sound).

• Sally Ride (a physicist and astronaut who was the first American woman in space).

Honorary membership is not lightly conferred, and is restricted to 20 living persons at any given time.

Touring the Explorers Club’s Home Base

The EC’s New York office serves as the nerve center of the club’s operations, and also hosts frequent lectures and other get-togethers that are open to non-members. Its decor, and the artifacts showcased throughout the premises, transport a visitor to distant lands. Making your way through the townhouse, it’s easy to imagine members traipsing off to the ends of the Earth and beyond.

Here’s what the Explorers Club’s digs look like on the outside:

The façade of the Explorers Club townhouse in New York City.

Detail of the entrance to the Explorer Club’s world headquarters at 46 E. 70th Street in Manhattan.

Built in 1910 in a neo-Jacobean style, this townhouse became the home of the Explorers Club in 1922. And now, join me for a brief tour of some of its more notable rooms and features:

If there’s one object you’d expect to find in an organisation of explorers, it’s a globe. This particular globe, by the way, was consulted by Explorers Club member Thor Heyerdahl when he was planning his epic trans-oceanic rafting expedition aboard the Kon-Tiki.

Percy the polar bear stands regally outside the library. 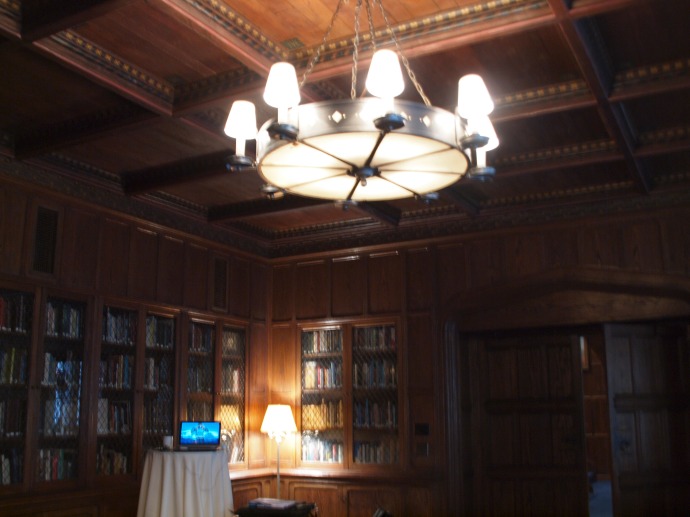 Another view inside the library, showing some of the elegant stained-glass windows for which the townhouse is known.

The second-floor terrace outside the library.

Heading upstairs to the Trophy Room

The rooms that I’ve shown you so far were nice enough; but the highlight of my wanderings through the EC’s building was the chance to enter the rarefied precincts of the “trophy room.” That chamber, located on the 5th floor, is usually off-limits to the public. Normally, visitors who aren’t members are prohibited from ascending higher than the second floor (the floor on which the library is found), as this sign indicates:

The public is usually not permitted to ascend above the second floor; but I was granted special access to climb these stairs!

Along with some fellow attendees at the event that brought me to the EC, I was granted special access to the Trophy Room, and thereby allowed a glimpse that’s usually only afforded to the club’s members and staffers. But before I got all the way upstairs, the stairwell itself provided some notable sights.

Adorning the walls of the stairwell are framed photographs of some of the members of the Explorers Club over the years, and of recipients of medals and awards that the EC has issued. Here’s one section of those portraits: 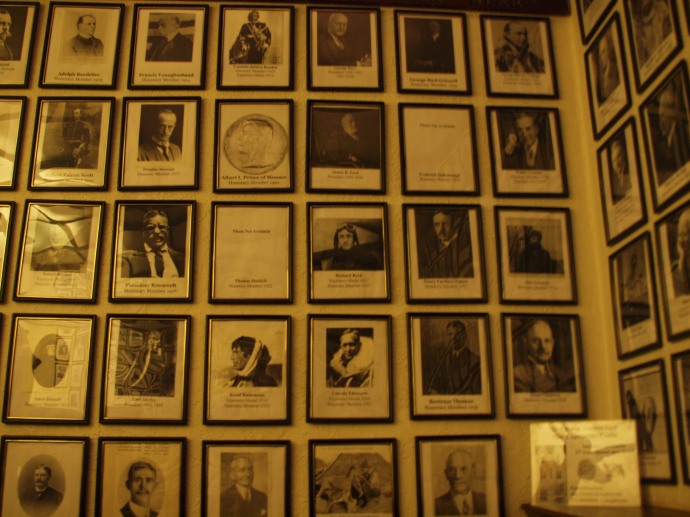 Assorted portraits of some of the leading luminaries who’ve belonged to, or been honoured by, the Explorers Club.

Although the identifying writing on the portraits is difficult to discern in the photo above, at the very least you should be able to make out the distinctive visage of Teddy Roosevelt. (You’ll find him in the second column from the left, about halfway down.) And now here’s a close-up of some of the portraits that hang along the stairwell. Do you recognize anyone you know?

As I continued to climb the stairwell, before making it all the way up to the fifth floor, I passed a rather curious architectural feature:

Who knows what absurdities lurk on the 4 1/2 floor?

Beside the plaque shown here was a door that presumably leads to floor 4 1/2. The existence of such a “half-floor” is reminiscent of the 1999 film Being John Malkovich, in which the protagonist worked as a file clerk on the 7 1/2 floor of an office building. It’s anybody’s guess what mind-blowing events might transpire on the EC’s 4 1/2 floor.

Finally I reached the fabled 5th-floor Trophy Room. You can readily see how that room acquired its name:

The Trophy Room would be a great place to hold your next board meeting!

Another view of the Trophy Room.

This guy never changes his spots. 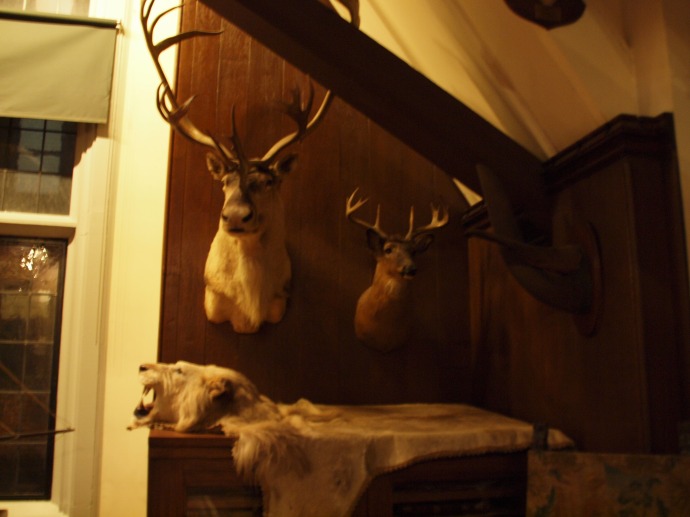 This rug would spruce up any floor.

In addition to the numerous taxidermied specimens, the Trophy Room contains display cases housing such relics as original rocks from Mount Everest. It also holds a scalp that allegedly came from a yeti; but sadly, I hadn’t heard about that scalp at the time of my visit, and thus didn’t know to look for it.

Kensington is unaffiliated with the Explorers Club; however, the EC’s townhouse seemed like a good fit as a backdrop for the unveiling of Kensington’s inaugural class of Explorers-in-Residence.

Chowing down on bugs

One of the hallmarks of the Explorers Club is its penchant for dishing out exotic food items at its gatherings. On the evening of my visit, following the ceremony introducing the Kensington Tours Explorers-in-Residence, it was announced that “alternative food” would be served, so the guests repaired into the library. At that point the servers brought out plates of some unusual hors d’ouevres that had been prepared in the EC’s kitchen. Inspired by my surroundings, I felt emboldened to try the scorpions wrapped in endives:

We are not at the Olive Garden.

And just in case you don’t believe that I really ate a scorpion, here’s some photographic evidence! 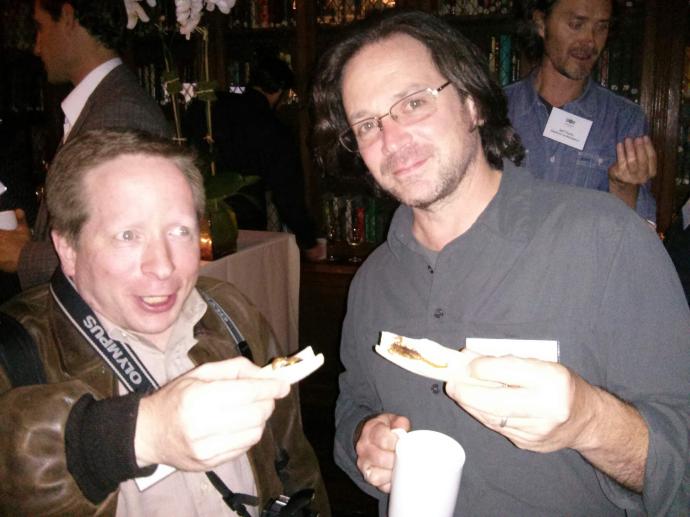 Yes, I really ate a predatory arthropod of the order Scorpiones!

Also making a fine accompaniment to the cocktails was the mealworms on crackers. Here you can watch me chomping on a tasty worm:

Although not pictured here, I also sampled a grasshopper. Additionally, each attendee at the reception received a swag bag, compliments of Kensington Tours, that included a jar of chocolate-covered crickets. The contents of my jar did not go unconsumed. 🙂

The delicacies that I describe here are only the tip of the iceberg when it comes to the exotic menu items that the EC is known for. Tomorrow night I’ll be attending the 110th Explorers Club Annual Dinner (ECAD), a black-tie event that will be held, as usual, at the Waldorf Astoria Hotel. While the menu for this year’s edition of the ECAD has not yet been disclosed, guests at last year’s repast enjoyed such gustatory delights as fried tarantulas on a stick, fried cockroaches on a stick, snake-fried rice, larva mixed vegetable platter, something called “mixed critters mini sandwiches,” goat penis souffle, and ostrich. (You can see photos of those delectable dishes here, if you dare.) It’s safe to say that I can look forward to similar Fear Factor-type cuisine this weekend. I can’t wait!

As you can see from the photos and video above, you don’t need to attend a formal dinner to enjoy “alternative food.” So if you’re in New York City, consider checking out one of the Explorers Club’s events. The club’s calendar of events is here. If you’re lucky, some choice selections prepared by the EC’s “Exotics Chairman,” Gene Rurka, will be served at the time when you drop in. But with or without the chance to eat bugs, visiting the Explorers Club is a great way to feel adventurous, even among the city slickers of Manhattan!

I am grateful to Kensington Tours and the Explorers Club for allowing me to attend the reception. The Explorers Club also graciously permitted me to return to the townhouse at a later time to take additional photographs.

2 thoughts on “Exploring the fascinating home of the Explorers Club”