Welcome to what, in the Northern Hemisphere, is the first Friday of autumn! (And if you’re reading this from below the equator, happy first Friday of the spring!) Fresh off my appearance this month as a quiz show contestant, I’ve registered to audition in early October for another game show: “Who Wants to Be a Millionaire?” Wish me luck with that!

As that audition approaches, I’ll have to fill out the written application and brush up on my trivia. But I’ll get to that stuff later. Right now, it’s time for another featured image from my travels. Our newest photo of the week comes from Morocco, and specifically from the city of Marrakesh. With a population of just over 900,000, Marrakesh is the fourth-largest city in Morocco; historically it often served as the capital of the Moroccan Kingdom. (Today, the capital city of Morocco is Rabat.)

The focal point of Marrakech’s medina (old city) is its vast central square and open-air marketplace that’s called the Jemaa el Fna. That square is well-known as a symbol of the city. Most notably perhaps, it appeared in several scenes in the great Alfred Hitchcock movie, The Man Who Knew Too Much (1956). Here’s a view looking towards the Jemaa el Fna at dusk: 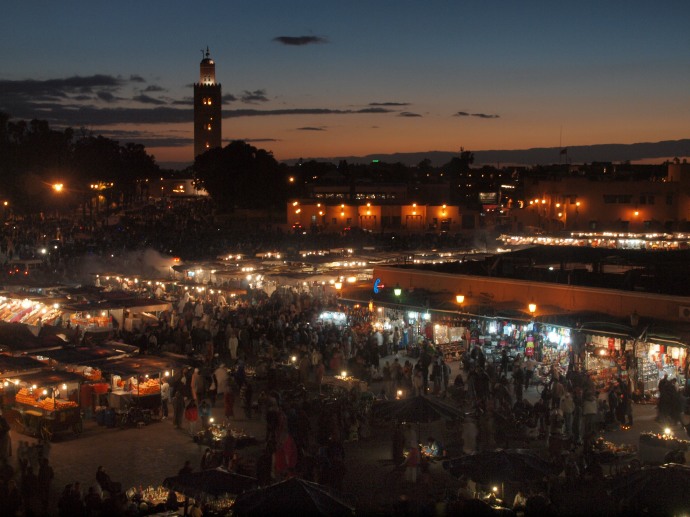 Rising up in the background is the minaret of the Koutoubia mosque. As you can see, the marketplace pulses with activity after the sun goes down; at that time it fills with stalls peddling street food and produce. If you look closely, you can see steam rising up from some of those stalls.

This photo was taken during my visit to Morocco in February 2011.