Touring Egypt, part 4: the earliest Egyptian pyramid in Saqqara, plus the ancient capital of Memphis

The pyramids in Giza date back over 4,500 years, a scale of time that can be difficult to comprehend. But none of the Gizan monuments can claim to be the oldest pyramid in Egypt. That distinction goes to the step pyramid built for King Djoser. You’ll find it in Saqqara, which, like Giza, is an easy day-trip from Cairo (Saqqara lies about 19 miles south of Cairo’s downtown). Saqqara is not a city; it’s a giant necropolis that, in antiquity, served the corpse-disposal needs of the nearby city of Memphis. During my September 2012 vacation to Egypt, my tour group spent a morning in the remains of Saqqara and Memphis.

SAQQARA: A CITY OF THE DEAD

The centerpiece of Saqqara is the step pyramid, which was completed before Djoser’s death in 2611 B.C. — thereby predating the pyramids in Giza by about 100 years. It features a more primitive “step” pattern, rather than the smooth sides of most pyramids you’ll see.

Although it has bragging rights within Egypt, this edifice might not be the absolute oldest pyramid in the world. The little-known archaeological site of Caral on the Peruvian coast contains buildings of that shape that may be as much as 5,000 years old, although their exact age is disputed. Caral’s pyramids, like Djoser’s memorial at Saqqara, feature terraced “step” patterns.

Regardless of whether its origins trace back quite as far as the pyramids at Caral, Djoser’s step pyramid was the first monumental structure in the history of the world to be constructed of cut stone. Previously, sun-dried mud-brick had been the material of choice. (The pyramids at Caral were fashioned from unworked stone.) It’s important to note that Djoser’s step pyramid was not built all at once; first came the portion of the structure that constitutes the first “step” (a flat-roofed form with outwardly-sloping sides that’s known as a mastaba, which had previously been standard for the tombs of eminent Egyptians), and construction then halted. The five uppermost layers were gradually added on, one at a time, during Djoser’s 19-year reign. So the final product basically consists of six increasingly-smaller mastabas stacked on top of each other. It’s not known at what point the architect envisioned the proto-pyramidal configuration that ultimately resulted. Did he have it in mind all along, or was it only after multiple steps were complete that he conceived of the possibility of a triangular appearance? In any case, the step pyramid topped out at about 204 feet in height (subsequently reduced by erosion to about 197 feet).

The designer, Imhotep, is the first known architect in history. He may also have been the world’s first renaissance man; in addition to designing buildings, he was an engineer, physician, and astronomer. In fact, according to wikipedia, the complete list of Imhotep’s official titles was “Chancellor of the King of Egypt, Doctor, First in line after the King of Upper Egypt, Administrator of the Great Palace, Hereditary nobleman, High Priest of Heliopolis, Builder, Chief Carpenter, Chief Sculptor, and Maker of Vases in Chief.” Other sources refer to Imhotep as Djoser’s vizier, a word of Arabic derivation that, in the context of ancient Egypt, connotes a pharaoh’s chief advisor. On top of all that, later generations worshipped Imhotep as Asclepius, the god of healing.

The reason for the scaffolding in the photo above: the step pyramid is being restored with limestone cladding on the sides. That material had originally coated it, but wore off long ago.

Finally, in case you’re wondering whether Djoser still inhabits the burial chamber within, the answer, sadly, is no. Like so many other Egyptian tombs, the step pyramid was plundered long ago. The only part of Djoser that was ever found was his mummified left foot. 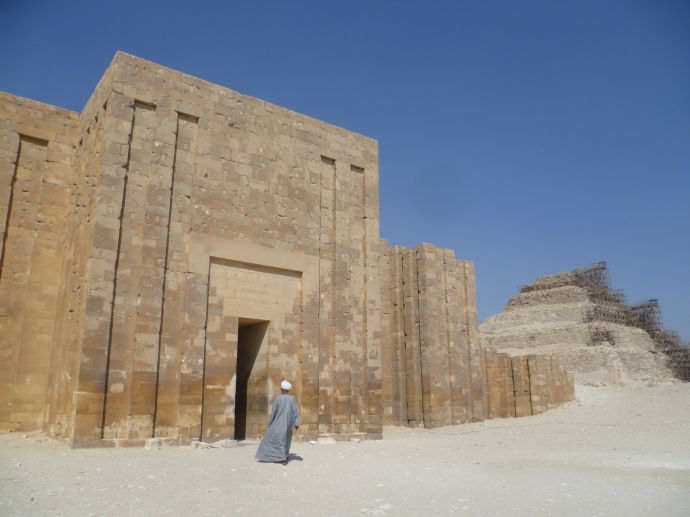 Part of the enclosure wall of Djoser’s funerary complex; Djoser’s step pyramid is visible at right.

Yet another first at Saqqara

In addition to Djoser’s groundbreaking pyramid, the ruins of the necropolis at Saqqara can boast of another architectural milestone: a set of what are believed to be the first stone columns in the world. I know that’s not as glamorous as “first pyramid,” but since I’m an architecture geek it still makes my heart go aflutter. 🙂 The columns line a colonnaded entrance to Djoser’s funerary complex.

These columns in Saqqara are believed to be the oldest stone architectural columns in the world.

Saqqara is essentially a giant graveyard, and burials were made within its sacred precincts for over 3,000 years. In addition to Djoser’s step pyramid, it contains 15 other pyramids and untold numbers of more conventionally shaped tombs (although most of those other places of interment aren’t open to the public). My tour included a stop at one of the most impressive tombs on the site, which belongs to Princess Idut. 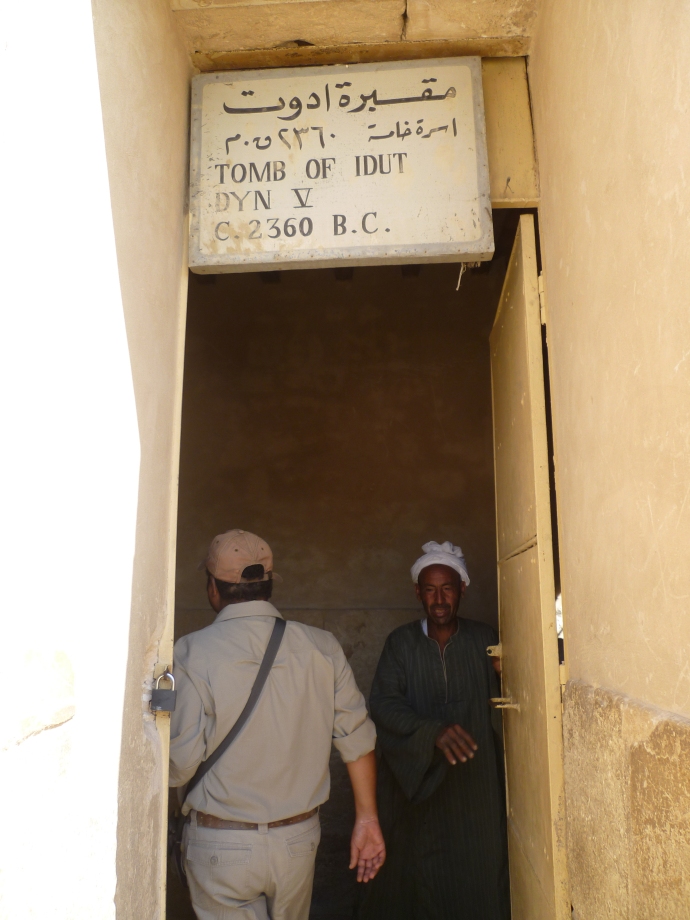 Entering the tomb of Princess Idut.

Inside Idut’s tomb, the limestone walls are decorated with elaborate and skillfully rendered reliefs. 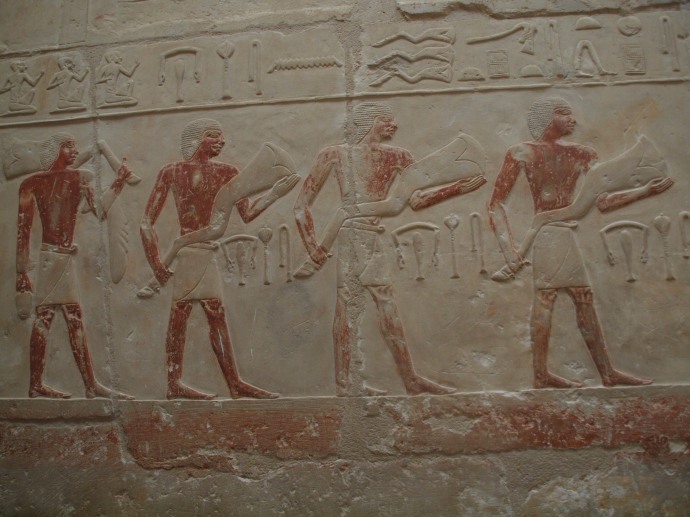 A relief in the tomb of Princess Idut.

This relief in the tomb of Princess Idut contains a scene of slaughter. 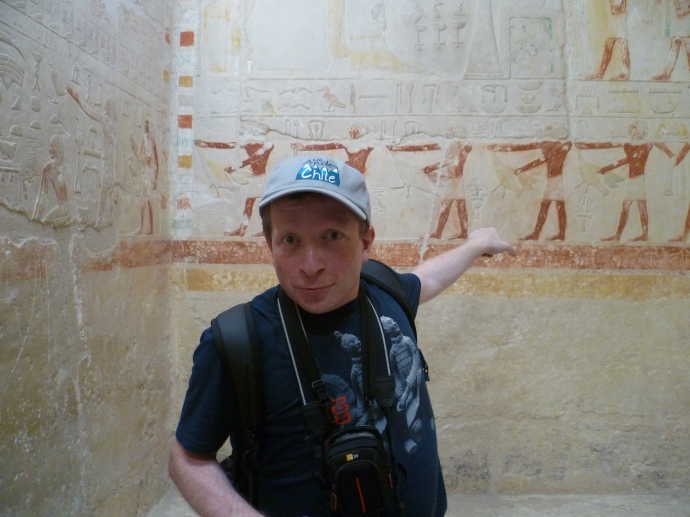 Me inside Idut’s tomb in Saqqara.

According to legend, Memphis was founded by King Menes. Credited with being the first pharaoh to unite Upper Egypt and Lower Egypt, Menes may or may not have been a historical figure. Regardless of who founded it, Memphis is widely regarded as the first capital of a unified Egypt, having held that status from roughly 2950 B.C. to 2180 B.C. (Memphis may actually have been the second capital. In classical times, some historians described a city called Thinis that they identified as having preceded Memphis as the Egyptian capital. No physical evidence for Thinis’s existence has been uncovered.) Memphis no longer exists as a municipality today, but its remains are a UNESCO World Heritage Site outside the modern town of Mit Rahina. The principal tourist attraction in the former Memphis is an open-air museum that displays a smattering of relics from that city’s glorious past.

The sign that heralds the Memphis Museum is just slightly overgrown. As with the ruins themselves, it’s a reminder that nature is always victorious in the end.

Among the highlights of the open-air museum are two statues of the pharaoh Ramses II, also known as Ramses the Great. That particular Ramses was the longest-reigning Egyptian king, having held sway over the country for more than 66 years (from 1279 B.C. to 1213 B.C.). The lesser colossus of him is a standing statue:

The standing statue of Ramses II in the open-air museum in Memphis.

An enclosed building that’s part of the museum displays another, even more colossal statue of this record-setting monarch, in recumbent form. That statue is about 34 feet long, even though it’s unfinished and lacks feet.

The recumbent colossus of Ramses II in the Memphis Museum.

Also on the grounds of the Memphis Museum is a sphinx. It’s not nearly as celebrated as the Great Sphinx in Giza (which I also visited), but it holds its own in its capacity to elicit wonder and awe:

The Alabaster Sphinx in Memphis.

Another view of the Alabaster Sphinx; in the background is the building that houses the recumbent colossus of Ramses II.

This sphinx is fun-sized — it’s about 26 feet long and 13 feet high, in contrast to the Great Sphinx at Giza which is 241 feet long — and it’s relatively youthful by the standards of ancient Egyptian sphinxes. (It’s believed to have been chiseled sometime between 1700 B.C. and 1400 B.C., which means that the Memphis sphinx may have been brought into being over a thousand years later than its Gizan counterpart). It’s been dubbed the Alabaster Sphinx, although it’s actually crafted from calcite, a mineral that’s merely similar to alabaster.

The Alabaster Sphinx originally guarded the Great Temple of Ptah. Ptah was viewed as the city’s protector deity; and the temple dedicated to him, which was the largest temple in Memphis, was called Hut-ka-Ptah (translated as “Enclosure of the ka of Ptah”). The Greek rendering of that name, Aί γυ πτoς (Ai-gy-ptos), is probably the etymological source of the name “Egypt.” (Only fragments of the Great Temple of Ptah survive; those fragments are part of the open-air museum in Memphis.)

Thus, to look upon the ruins in Memphis is to behold the origins of Egypt’s very name. Even in a country teeming with history, Saqqara and Memphis afford the visitor with unique insights into the development of a civilisation.

Read the first four parts of my series on Egypt! 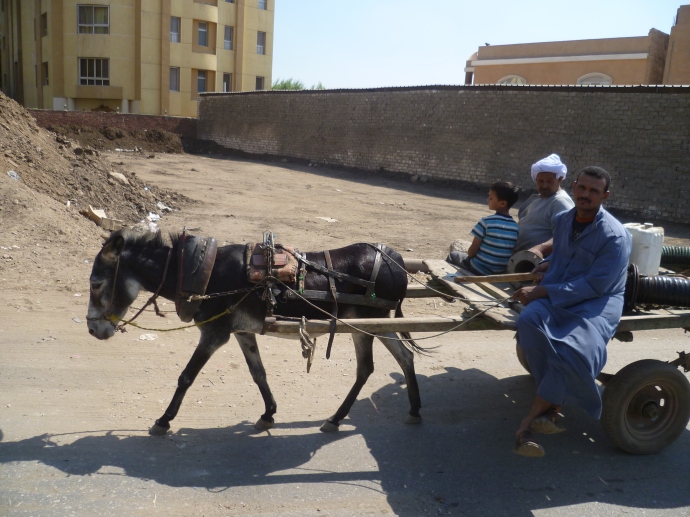 In 21st-century Egypt, it’s common to see donkeys used as basic transportation, even on city streets. This photo was taken somewhere between Memphis and Giza.

8 thoughts on “Touring Egypt, part 4: the earliest Egyptian pyramid in Saqqara, plus the ancient capital of Memphis”