Country no. 46 on my World Karaoke Tour: everything is bigger in Dubai 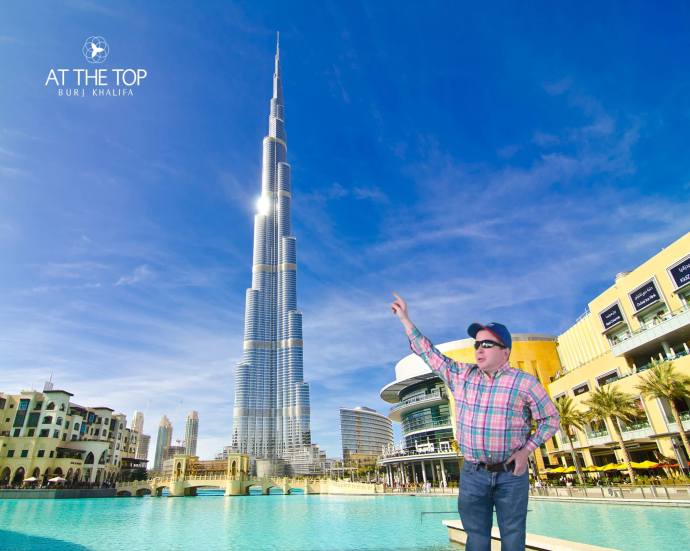 This is a cheesy souvenir photo I purchased on the 124th floor of the Burj Khalifa. It was taken in front of a green screen, and the background was then superimposed.

Rising over one-half mile into the Dubai sky, the Burj Khalifa is currently the world’s tallest building, a superlative it’s claimed since 2008. (Sources disagree on the precise extent of the Burj Khalifa’s verticality; depending on which website you ask, its height is either 2,717 feet or 2,722 feet. Regardless, it’s fair to say that this particular edifice is damn tall.) At this writing, an even more skyscraping building, imaginatively dubbed The Tower, is under construction across town in Dubai, and is slated to be finished in 2020. The elevation at which The Tower will top out has not yet been determined, but is expected to exceed that of the Burj Khalifa. Both the Burj Khalifa and The Tower, however, will be dwarfed by the Jeddah Tower in Jeddah, Saudi Arabia — also on target for completion in 2020 — which is planned to ultimately soar to 3,307 feet above ground level. That’s a full kilometer!

While Dubai stands to lose the distinction of possessing the loftiest man-made structure on the planet, it will remain an embarrassment of riches for urban architecture geeks like me. In recent decades the city’s skyline has experienced explosive growth, to the point where Dubai now ranks third among all world cities in number of skyscrapers (defined as buildings at least 150 meters, or 490 feet, in height); as of this writing, Dubai boasts no fewer than 173 skyscrapers. (The two cities with even more skyscrapers than Dubai are Hong Kong and New York City.)

A pair of stratospheric erections (Get your mind out of the gutter; I’m using the word “erection” as a synonym for “building”)

Obviously, the Burj Khalifa is — for now — the signature landmark not just of Dubai, but of the United Arab Emirates (UAE), the nation to which that city belongs. Soaring above the many other skyscrapers of Dubai (at least until The Tower surpasses it), the Burj Khalifa is visible from points throughout the sprawling metropolis. 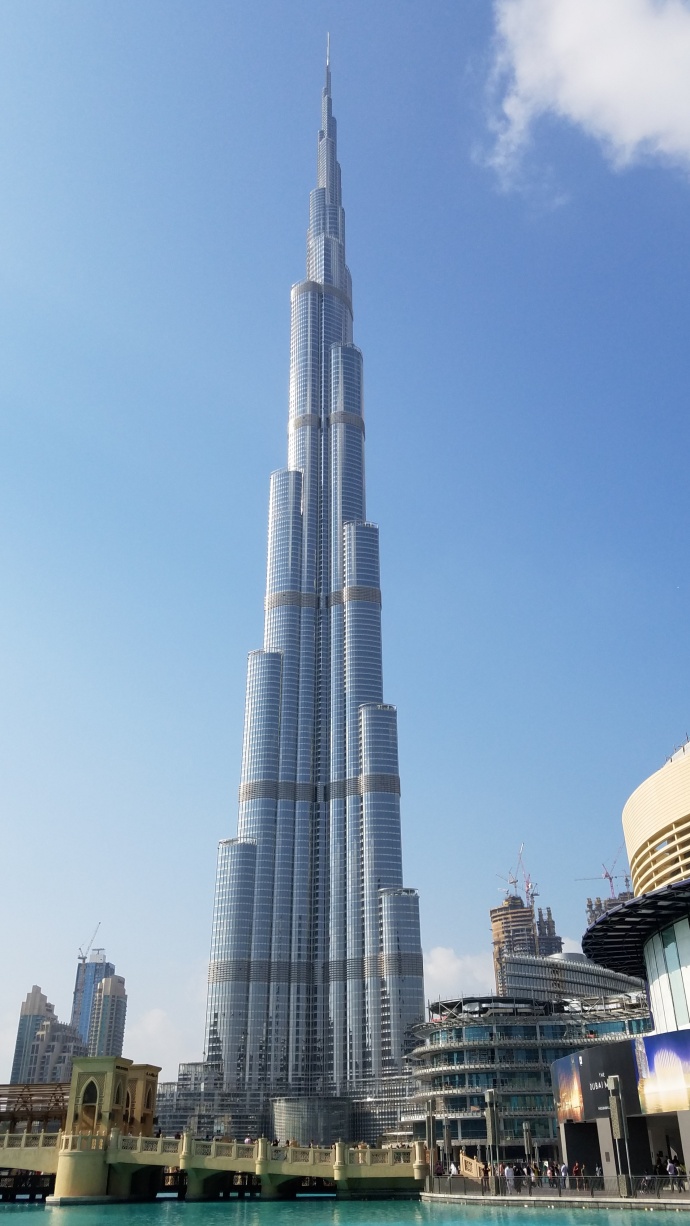 The Burj Khalifa is so tall, it’s difficult to fit the whole thing in the frame when photographing it.

Below is an an example of the view from the top. Well, not the absolute summit, but the 148th floor, which is as high as tourists are permitted to ascend. (Its highest occupied floor is the 154th, which contains corporate suites; several even higher levels house mechanical and communications equipment.) Frankly, you should save your money and just buy a ticket to the 124th floor, which costs significantly less; I found the vista from floor 148 to be pretty indistinguishable from the one from floor 124. 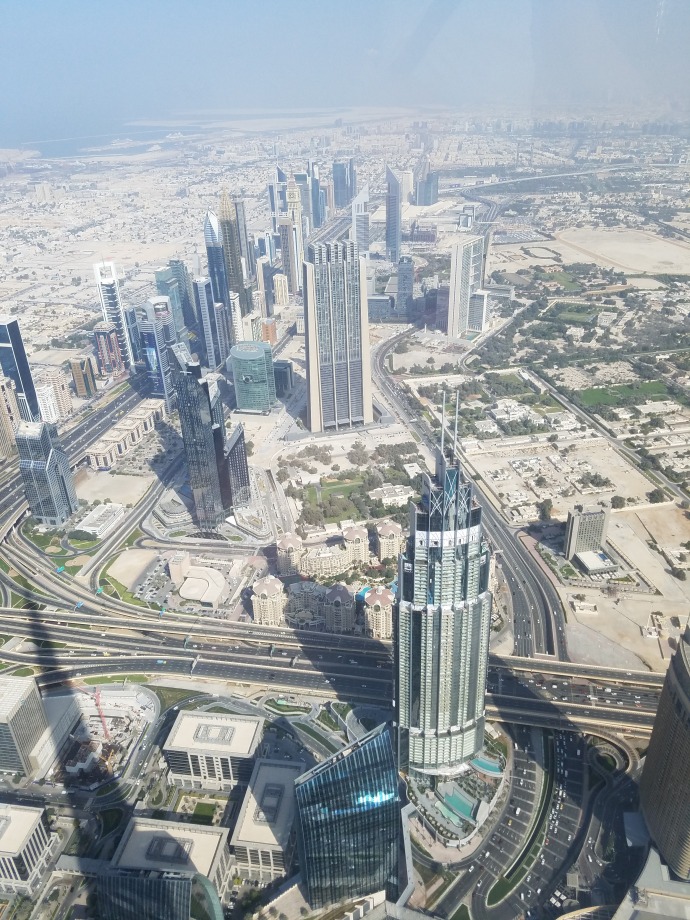 Looking down from the 148th story of the Burj Khalifa.

My personal favourite among all of Dubai’s skyscrapers, although nowhere near its tallest, is the Burj al-Arab. Completed in 1999 and housing a luxury hotel, the Burj al-Arab stands “only” 1,053 feet high and is known for its distinctive sail shape. It’s a candidate for the honorifics of “most unique appearance of any skyscraper on Earth” — and, I submit, best-looking skyscraper as well. 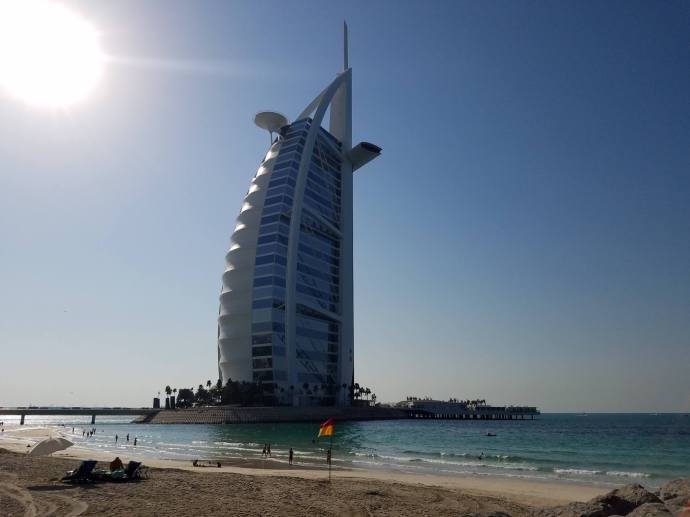 Built on an artificial island and containing a super-luxe hotel, the Burj al-Arab opened in 1999.

While I never tired of staring at the Burj al-Arab’s exterior, the atrium that greets you upon entering it is also quite a sight. Here’s a video showing that atrium:

A more classic side of Dubai: the souks

Before glass-and-steel behemoths proliferated within its city limits, the focus of commerce in Dubai was its souks, the markets contained within warrens of lanes and alleyways. Souks, common in the Middle East and northern Africa, are known for their meandering passages, and the high-pressure sales tactics of the vendors in their stores and stalls. Dubai’s souks, found in a district called the Bastakia Quarter, are still going strong and stand in stark contrast to the modernity of the rest of the city. Here are a few glimpses from a morning I spent wandering through them:

The Bastakia Quarter, seen from the water taxi that ferried me to it. 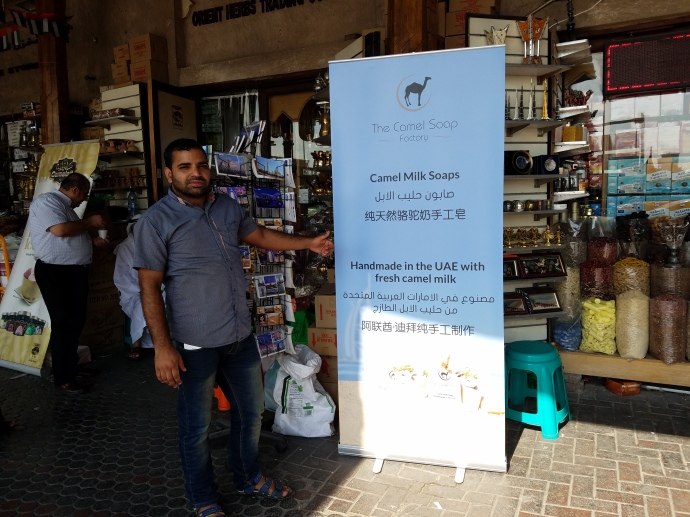 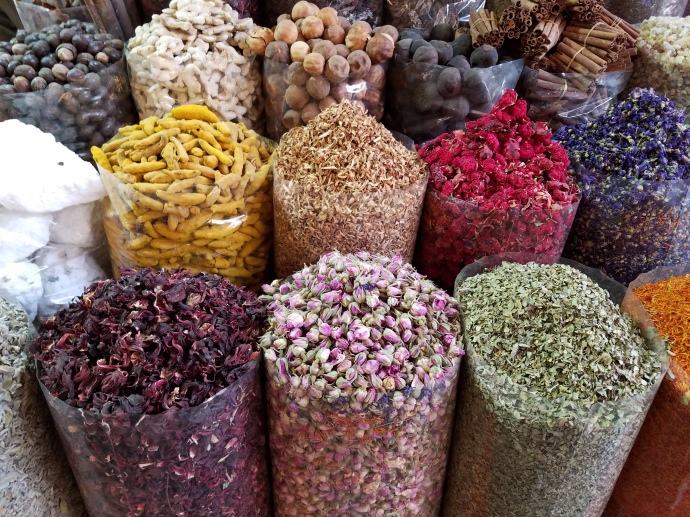 Spices, salt, and other flavour enhancers arranged outside a store in one of the souks. 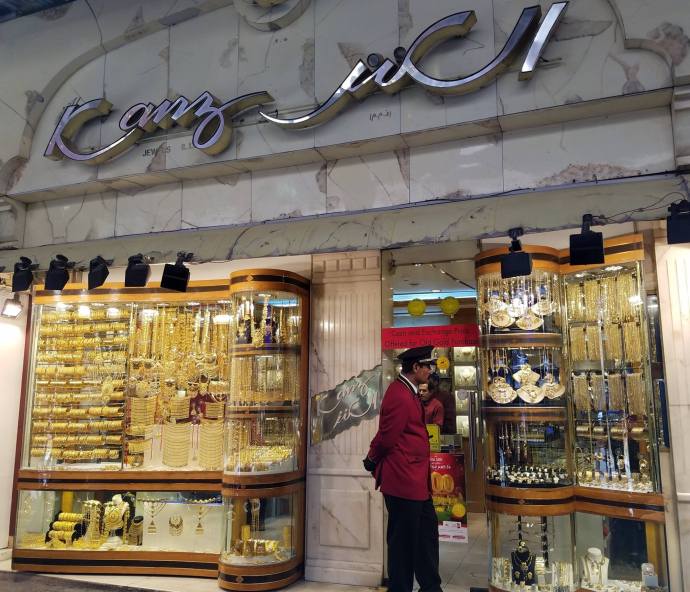 A store in the Gold Souk, a specialized marketplace consisting of stores that sell gold jewelry — and, in some cases, buy or sell old gold.

Karaoke in Dubai: inspired by the grandeur of the city

I wasn’t only in Dubai to gawk at high-rises or dodge aggressive merchants at the souks. Dubai being my introduction to the UAE, I naturally wanted to sing there and thereby add the UAE to my World Karaoke Tour. My Dubai karaoke debut took place in the Hibiki Music Lounge, a bar that adjoins the city’s Hyatt Regency hotel. (Actually, in e.e. cummings style, the bar’s signage identifies the venue as the “hibiki music lounge.”) 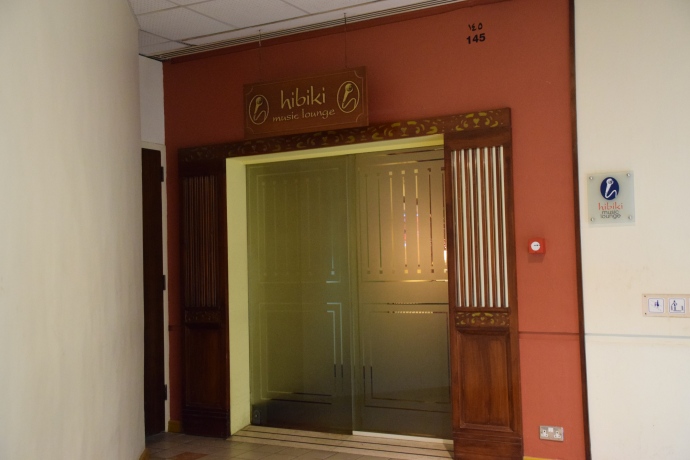 The entrance to the hibiki music lounge.

For my opening song, I chose one of my all-time favourite tunes to perform: “Oh, Pretty Woman” by Roy Orbison. You may recall that this was my opening number in the city of Chișinău in 2013 when Moldova became the record-setting 30th country in which I’d sung karaoke. Here’s how my rendition of the song went in Dubai:

The karaoke at Hibiki (or hibiki, if you prefer) is run by a Filipino expat named Pocholo. That didn’t come as much of a surprise to me; I’ve written before about how massively popular karaoke is in the Philippines, as evidenced by the facts that (1) the driver of the karaoke-equipped Uber vehicle that I’ve ridden in the Washington, DC area hails from the Philippines, and (2) the place where I sang in Doha, Qatar, just a couple of days before my appearance in Dubai, was a Filipino restaurant.

Me with Pocholo, the man who runs the karaoke at the hibiki music lounge in Dubai.

My second song of the evening was Barry Manilow’s “Mandy,” but I don’t have a video of that encore performance to share with you.

And that is how, on Sunday, January 8, 2017, the United Arab Emirates became the 46th country in which I’d karaoked. I would look to increase that tally in late spring when I travelled to east Asia; my first attempt at country # 47 would come in Kathmandu, Nepal. 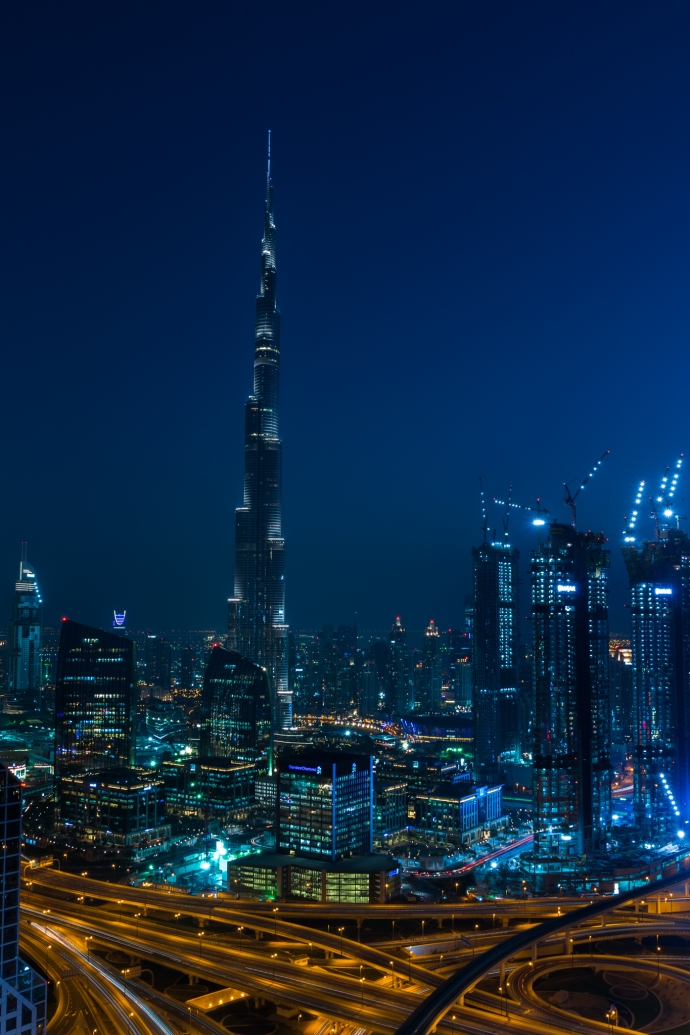 A view of the Dubai skyline at dusk, featuring the Burj Khalifa. This photo was taken from the Shangri-La Hotel.

4 thoughts on “Country no. 46 on my World Karaoke Tour: everything is bigger in Dubai”

Hello there! I'm an attorney and worldwide karaoke singer who's based in New York City. So far I've sung karaoke in 64 countries around the globe, plus Easter Island - as well as all 50 U.S. states! This website chronicles my World Karaoke Tour as well as my general travel adventures. Learn more

Hanging out with a black-and-white ruffed lemur at Lemur Island in Madagascar. As you can see, the giy weighed a lot! Would you like to visit Madagascar?
A view of Antananarivo, the capital of Madagascar. As you can see, it's a hilly city. Would you like to go to Madagascar?
The Church of St. George in Lalibela, Ethiopia is the most magnificent of that city's 11 rock-cut churches, which date from the 12th or 13th century. Have you heard of Lalibela?
Enjoying Tel Aviv! Have you been to this city?