It happened. I met another H-Bomb.

I’ve been singing under the sobriquet “H-Bomb” since 1992; the story of how I acquired that nickname can be found here. It’s rare to find another karaoke singer who uses any stage name, let alone mine. But occasionally I’m alerted to the presence of another H-Bomb in the karaoke world. When that occurs, I feel compelled to meet my namesake.

This is the story of how a world traveler like me ended up in the unlikely locations of Poughkeepsie, New York and Murfreesboro, Tennessee — and how establishments in those places, as well as in the larger Tennessee city of Nashville, became some of the most rewarding additions to my World Karaoke Tour.

The town of Poughkeepsie in upstate New York is best known as the home of Vassar College, an elite liberal arts institution that was once known as one of the “Seven Sisters.” In 2009, that town landed on my radar screen for a reason that had nothing to do with higher education. A friend who lives nearby had driven by a local establishment called Planet Wings, and she reported that its marquee sign was advertising a “KARAOKE . . . BY H BOMB” show on Thursday nights.

The marquee sign outside Planet Wings in Poughkeepsie, in April 2009.

So, on Thursday night, April 2, 2009, after work, I took a commuter train from Manhattan’s Grand Central Terminal to Poughkeepsie. My friend Lynn met me at the train station and ferried me to Planet Wings. (I’d met Lynn years earlier, via an internet message board devoted to the American game show, “Who Wants to be a Millionaire?”). At Planet Wings, I surprised the local H-Bomb, whose given name is Hobie.

Me with Poughkeepsie’s version of an H-Bomb, in April 2009.

I did, of course, do some singing at Hobie’s show. Sadly, I didn’t have the presence of mind to have video, or even still photos, taken of any of my songs from that night. (This occurred over two and one-half years before I launched my blog, and at the time I rarely felt motivated to preserve my performances.) I think one of the numbers that I did may have been a Billy Joel song, but I’m not sure. Although no documentary evidence exists, I also got Hobie to admit that I was the one true H-Bomb. 🙂

Last summer, I was googling and Bing-ing “H-Bomb karaoke” to assess the performance of this blog in search engine rankings. Through the results of those searches, I became aware of Duggers Food & Fun, a bar and restaurant in Murfreesboro, Tennessee that advertises a show called “Karaoke with the ‘H Bomb’ Heather” on Friday and Saturday nights.

As soon as I learned of the existence of “Karaoke with the ‘H Bomb’ Heather,” I knew what needed to be done. It was time to plan some travel to the great state of Tennessee! That visit happened during President’s Day Weekend in February 2013. As with Poughkeepsie four years earlier, for maximum impact, I chose not to give advance notice to Heather that I’d be dropping in on her show.

Murfreesboro, a city with a population of just over 100,000, is only 31 miles from Tennessee’s capital city of Nashville. Also known as Music City, Nashville has played a significant role in the history of country music and is generally regarded as the epicenter of that musical genre. Nashville also boasts an outstanding scene for live music, centered on the bars that line its main drag of Broadway. Additionally, thanks to an American television series, Nashville is now particularly trendy. Thus, I decided to combine Murfreesboro and Nashville into one spectacular long weekend.

In due course, I’ll cover what I saw and did in Nashville — as well as my daytime exploits in Murfreesboro, which I found captivating in its own right. But in the remainder of this post, I’m going to tell you all about my Tennessee karaoke experiences.

My first-ever singing appearance in the Volunteer State occurred in Nashville, on the Friday night that I arrived from New York — on the eve of my excursion to Murfreesboro. The bar in the Nashville hotel where I was lodging just happened to be offering karaoke on Friday nights. In fact, the show was already underway by the time I checked in! Could they have made it any more convenient for me? 🙂 Here you can watch me at that hotel bar, singing “My Life” by Billy Joel:

While the focus of my World Karaoke Tour is understandably the international checkpoints that I pass through, I also enjoy seeing new and different locations in the vast and diverse country that I live in. On Friday, February 15, 2013, Tennessee joined 12 other U.S. states, plus the District of Columbia, in which I’ve made karaoke appearances. But an even more exciting Tennessee singing experience still awaited me.

The main event: a summit of H-Bombs in Murfreesboro

Duggers Food & Fun certainly looks unassuming on the outside, being situated in a strip mall known as the Kroger Center: 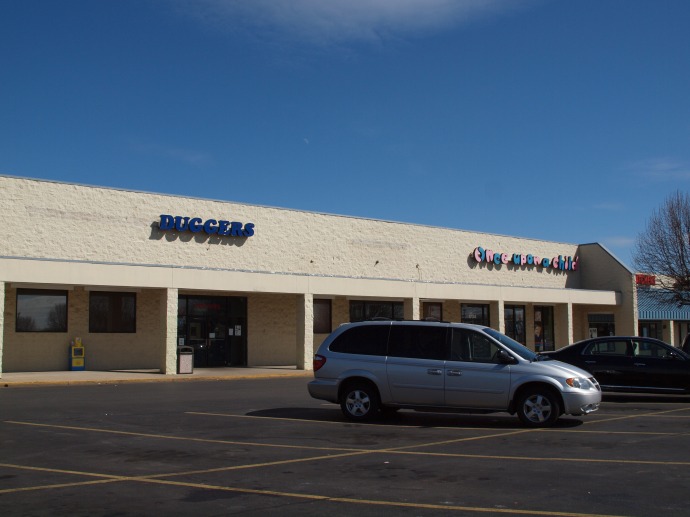 The exterior of Duggers Food & Fun in Murfreesboro, Tennessee.

Inside, Duggers boasts a cavernous space — a stark contrast with the cozy watering holes where I typically go for karaoke in New York City. It menu offers diverse food choices. But of course, the reason I was there was to sing.

On Saturday night, February 16, 2013, I strode into Duggers, excited for what was about to transpire. I introduced myself to Heather and explained the mission that had brought me to her karaoke show. Heather told me that the owner of Duggers had bestowed the “H-Bomb” name on her about three years ago.

I think that at first, Heather didn’t realize that my visit to her gig was actually the entire purpose for my trip to Tennessee. I can’t blame her, since my visit was unannounced and my reason for going down to Murfreesboro was admittedly unusual. 🙂 She was very nice, though, and made me feel at home. She definitely showed herself to be worthy of the coveted H-Bomb moniker!

Here I am with Murfreesboro’s own H-Bomb!

The song with which I opened at Duggers was the most recent addition to my karaoke A-list: “Oh, Pretty Woman,” originally recorded by Roy Orbison.

The next time I was called up to the stage, I performed one of my long-time standards: “True” by Spandau Ballet.

My third song of the night was “La Bamba” (the Los Lobos version from the 1987 movie about the life of Ritchie Valens). “La Bamba” always gets a crowd going, and the night of February 16, 2013 at Duggers was no exception! (No video was taken of this song, partly because this blog already includes multiple videos of my renditions of it.)

Overall, I had an amazing time at Duggers and it was a great treat to get to know Heather. I hope to stay in touch with her, and I also hope that I’ll get the chance to sing with her again. If you ever find yourself in Murfreesboro, Tennessee on a Friday or Saturday night, go to her karaoke show!

You may be wondering, by the way, why my set list at Duggers didn’t include any country songs. That’s a fair question; as mentioned above, country music is closely identified with Tennessee. Indeed, earlier on the same day that I ended up at Duggers, I toured the Country Music Hall of Fame and Museum in Nashville. But prior to my arrival in Tennessee, I knew relatively little about country music, and was not very familiar with many songs in that genre (or with the artists who recorded them). There were certainly no country songs that I knew well enough to have the confidence to sing in front of an audience of strangers.

Thus, I figured that I would just go with some of my favourite non-country tunes. In making that decision, I reasoned that Tennesseans, like folks everywhere else, would tend to enjoy a variety of musical styles; and that the appeal of classics like “Oh, Pretty Woman” and “La Bamba” — and even early ’80s hits like “True” — is widespread. In retrospect, this reasoning was entirely justified.

True, a large percentage of the songs that I heard from other singers at Duggers was of the country variety. But a fair amount of non-country material was also performed at Heather’s show. For example, there was this guy who treated the audience to a prototypical 1980s pop song, “Sunglasses at Night” by Corey Hart:

My weekend in Tennessee did instill in me a newfound appreciation for country music — its history and heritage, as well as the songs themselves. Ever since my return to New York, I’ve begun learning country songs and incorporating them into my repertoire. Already I’ve sung “Hey Good Lookin'” by Hank Williams; “Ring of Fire” by Johnny Cash; and “Crazy” by Patsy Cline. I’ll be trying out additional country songs in the coming weeks. I’m excited about this diversification of my oeuvre. The next time I find myself in the Volunteer State, I just may have to be a little bit country!

The afternoon after meeting Heather in Duggers, I caught a bus from Murfreesboro back to Nashville, where I spent one final night before flying back to New York. On that night, while hanging out with my college friend Carolyn and her boyfriend (who coincidentally were visiting Nashville the same weekend that I was in town), I ended up at a downtown karaoke bar called Lonnie’s Western Room.

Lonnie’s has a colorful stage area (although the stacked cartons of beer make for an unusual backdrop):

Lonnie’s was fun, but that was to be expected since it had been recommended to me by Heather. Naturally I sang there; but due to a miscommunication with my friend about how to record video on my smartphone, I’m unable to share any evidence of that. 🙂 Going to Lonnie’s also allowed me to see a part of Nashville’s downtown that’s a little off the beaten path. Lonnie’s is found on Printers Alley, a block of nightspots that’s a brisk walk away from Broadway.

Printers Alley — so named because it housed headquarters of print shops and newspapers in the early 20th century — today consists of an entertainment district that offers a vastly different scene from the crowded bars and restaurants on Broadway. This alcove has a gritty feel; some have even described it as seedy. While in Nashville, I even heard rumors of a “nude karaoke” establishment on Printers Alley (although I never ended up finding it — not that I went out of my way to look for it). I have to say, though, that Lonnie’s (which does not claim to offer nude karaoke) is a perfectly respectable place and I felt comfortable in there.

After my enjoyable time in Tennessee, I’m back to adding new countries to my World Karaoke Tour. Next up on that tour will be Russia, the Ukraine, and Moldova. I leave for that trip on May 11!

6 thoughts on “It happened. I met another H-Bomb.”